Now Bob Frederick knows why they call it the California Death Ride.

"I envisioned the worst," Frederick said, "and it was."

Frederick, who was Kansas University's athletic director from 1987 to 2001, completed the grueling 129-mile bicycle test that required participants to traverse five mountain passes with total climbs of 15,000 feet.

"It's the hardest thing I've ever done, including running in six marathons," he said. "There's nothing even close."

Frederick flew earlier this month to Reno, Nev., where he met his oldest son, Brian. Then the two drove to nearby Markleeville, Calif., the starting point for the body-punishing event.

Up early, Frederick took off at 4:30 a.m., worried that if he left at the regular starting time of 5:30 a.m. he wouldn't finish by 8:30 p.m. when the course was shut down. But that was the least of his worries. 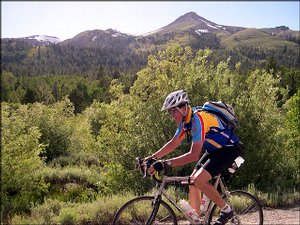 The Lawrence Public Library will be launching a new "Dr. Bob Book" program on Friday. The program celebrates the life of former Kansas University athletic director Bob Frederick, who valued eating right, exercise, good sportsmanship and treating one another with respect. Frederick enjoyed bicycling and is pictured during a 129-mile ride in California in 2005.

"I didn't sleep for two weeks before I went there because I didn't think I could do it," Frederick said.

An hour or so after setting out, he was convinced he had been right. He hit the wall on the second pass.

"The first pass was hard, but at the second pass I was thinking there was no way I could finish," he said. "I had a terrible headache at the top, but when I got to the bottom I stopped for some water, took some Ibuprofen, cooled off, and that got me going again."

The third Death Ride pass is considered the worst, with riders forced to climb a steep 10-percent grade and then another one of 12 percent.

"Once I got to the top of the third pass I knew I could make it the rest of the way," Frederick said. "Then after the fourth pass, I was sure I could gut it out and make it." 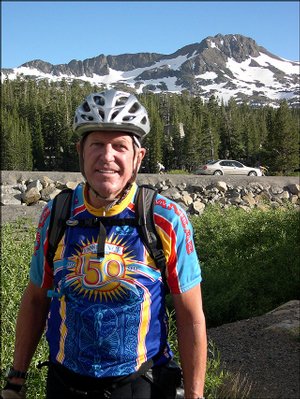 The former Kansas AD, who now teaches sports management courses in the KU School of Education, spent nearly 13 hours on his bike and, with rest stops and food breaks, about 15 hours on the course.

Overcast skies no doubt prevented heat problems, and, according to Frederick's son, the wind helped, too.

"It was windy, and one bike pro told me," Brian Frederick reported, "that although dad didn't get the altitude training in the mountains, the training in the Kansas winds was almost as good."

And so Frederick, at the age of 65, was able to complete the Boston Marathon of cycling, a challenge that must be attempted before a cyclist can consider himself a full-fledged member of the breed.

For their efforts, those who complete the body-numbing event receive a pin. 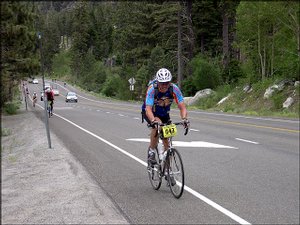 That's all. A little pin.

"And a fudgesicle," Frederick added.

The California Death Ride also offers an optional sixth mountain pass, but Frederick says he'll pass on that pass. He won't return to the Death Ride. And not because of the lung-busting climbs.

"For me, the descents were sheer terror," Frederick said. "Having had one accident, I was very conservative going down those winding roads. Some people were passing me at 45 and 50 miles an hour. At my age, going down is the hardest part."

Back in 1994 while riding on the Clinton Dam road, Frederick took a spill that resulted in three broken ribs, a punctured lung, a broken scapula and a concussion.

If he hadn't have been wearing a helmet, doctors told him, he probably would have been killed.