Half of conference's coaches haven't settled on starter

Not by a long shot.

Half of the football coaches in the conference have yet to make a decision about their starting QB with the first weekend of games only five weeks away.

In addition to KU -- which has Adam Barmann, Jason Swanson, Brian Luke and maybe even freshman Kerry Meier duking it out -- the coaches at Kansas State, Nebraska, Texas Tech, Oklahoma and Oklahoma State haven't arrived at a decision.

The Huskers likely will name Zac Taylor, a transfer from Butler County Community College, the starter sometime during the preseason, and it appears Barmann might have an edge at Kansas after a solid summer.

The other schools have front-runners, but no definitive selections. Despite the uncertainty, none of the undecided coaches feels uncomfortable. 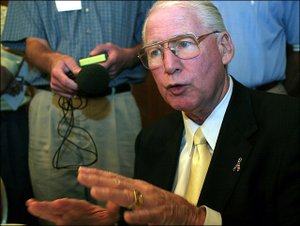 Kansas State football coach Bill Snyder answers questions during interviews at the Big 12 Conference Football Media Days. Snyder, who met the press Thursday in Houston, is one of six league coaches who hasn't settled on his starting quarterback.

"Secondly, if you have an injury, you're not starting from scratch."

That's exactly what happened at Kansas State last year. The front-runner this summer appears to be Dylan Meier, an older brother of KU's freshman signal-caller.

Dylan Meier was limited to six starts as a sophomore last year, and an early-season shoulder injury limited his ability to throw during practice early in the fall. In Meier's place, Alan Webb stepped in for the other five starts, including the Sunflower Showdown with KU, and threw for 521 yards.

Meier and Webb each appeared in 10 of K-State's 11 games, meaning the quarterbacks played the entire game only once during the season.

"The best thing about that is you get competition," KSU offensive lineman Jeromey Clary said. "Competition at any position ... you get the best of the best every weekend. That's what we're going to get this year."

Most of the coaches, including Mangino, seem to echo Clary's statements.

He's having so much difficulty, in fact, that he already knows both will play in the season opener against Montana State.

"We are fortunate that we have two players in that position," Gundy said. "I saw the results from some of the testing somebody put on my desk the other day, and they are doing a good job in the weight room, so I would say we play both."

Gundy, a former OSU quarterback, admitted a two-quarterback system wasn't desirable, as did most other coaches tackling the issue.

But until someone emerges, the battles will continue at six Big 12 schools until the season opener -- and maybe even beyond.

"I think the important thing is that the players have an appreciation for each other," Snyder said, "that they allow themselves to understand the capabilities of each other, and understanding that both of them, in all likelihood, could be on the field."