Houston — As heated as the Arrowhead-game debate seems in Lawrence, it apparently is just as uninteresting to the team making the trip.

Kansas University decided to move its Oct. 15 Big 12 Conference football home game with Oklahoma to Arrowhead Stadium in Kansas City, Mo. More tickets -- at a bloated price -- will mean more revenue for the KU athletic department. But questions have emerged regarding home-field advantage, which could be wiped out if OU fans come by the thousands -- which KU is expecting, and hoping for financially.

So, what do you think, Oklahoma?

"I didn't even know about it," linebacker Clint Ingram said Wednesday at Big 12 media day. "That's the first I heard about it."

His teammate, offensive tackle Davin Joseph, actually knew the Sooners were going to play at Arrowhead. But when asked whether KU's home-field advantage was lost, he needed a minute.

"It's tough playing on the road," Joseph finally said. "I think it's more of a home site for them than it would be for us." 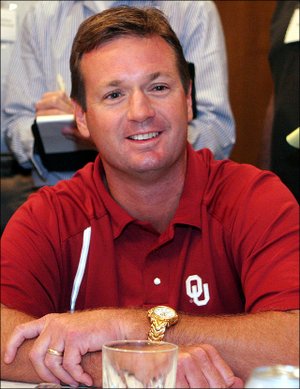 Location-wise, sure. But OU has played in Arrowhead before, making it to the Big 12 championship game each of the last two seasons. KU has not.

Regardless, KU players say they're excited about going to Kansas City. After all, it is an NFL venue that's on television every Sunday in the fall.

"For me, it's extremely exciting, because I'm a die-hard Chiefs fan," linebacker Kevin Kane said. "I grew up in Kansas City, and I think it's going to be a great time."

"It's going to be fun to play at a pro stadium," Reid said. "It kind of takes away from the home-field advantage, but we'll still have a good crowd."

¢ Replay proponents: Maybe it's coach-speak, but it was hard to find any Big 12 coach willing to say the new instant-replay system wasn't good for the conference, including KU coach Mark Mangino.

Nebraska coach Bill Callahan, though, said he preferred more power from the coaches -- power he had while coaching the Oakland Raiders in the NFL, where coaches can challenge plays.

"I would like to have a red flag in my pocket for a game-changing decision," Callahan said. "Whether it occurs or not, I'd like to have that option."

In the Big 12, only referees in the booth will be allowed to challenge on-field rulings.

Stoops cited his tradition to bring seniors to the event. Peterson is just a sophomore.

"Besides," Stoops said, "why burden him on having to see all you guys?"

¢ Quote of the day: One of many gems from Texas Tech coach Mike Leach, when introducing -- unsuccessfully -- his cornerback, the uniquely named and hard-to-pronounce Khalid Naziruddin, to the media: "This is Khalid ... uhh ... well, you're on your own with that one."