2. What's up with KU's self-imposed recruiting sanctions that were announced last week?

The three Jayhawk players at the JW Marriott Hotel - offensive lineman David Ochoa and linebackers Nick Reid and Kevin Kane - heard them, too. They entertained the first one and shrugged off the second.

"I don't even know what exactly happened, to tell you the truth," Reid said. "It hasn't affected us at all."

What happened was minor scholarship loss and restrictions to the number of junior-college players Mangino can recruit, after instances of improper academic support were found to have occurred in the summer of 2003. KU will have one less scholarship to hand out the next two recruiting seasons and only will be allowed to bring in three players from two-year schools during that time.

Mangino said he wouldn't comment on specifics of the case until the NCAA wrapped up its pending investigation. But he did try to analyze what the self-imposed punishments could mean to his staff's recruiting strategy.

"As a coach, you'd like to not have a restriction on anything," Mangino said. "But we'll deal with it.

"A lot of times, you don't figure out what your junior-college needs are until you play games. But it's my goal to get to the point where we hardly have any (juco players)."

Mangino said he hadn't spoken to his players about the issue and only alerted his staff Friday morning about the news conference later that day. He said he expected the focus to turn away from the issue in time. 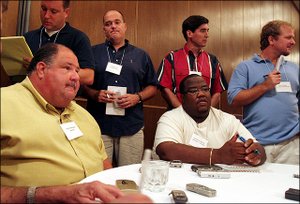 "My feeling is, our fans, our student body, everybody, they're ready for football season," Mangino said, "and they really believe in what we're doing."

Which set up the other question: What's up with the Big 12 North this season, and where does Kansas fit in?

With the majority of scribes at media day coming from nearby Texas cities, the questions weren't phrased endearingly toward the North's less-than-spectacular effort last season. But everyone seemed to agree the North was wide-open this fall - including Mangino, who saw the race from the rare glass-half-full perspective.

Mangino said he expected improvement everywhere, even on the question-mark offense. The fourth-year coach praised quarterback Adam Barmann about his solid summer, implying he might be the frontrunner for the job.

Senior Jason Swanson, the main challenger, has battled a nagging injury this summer and hasn't progressed as much as desired.

Regardless, each Jayhawk answered the Big 12 North question with his own flair. Ochoa had no answer to what team would win the division.

Kane, on the other hand, knew which pony to pick.