Athletics investigation will be first since 1988

The reports will prompt the first NCAA investigation of KU athletics since 1988.

Football coach Mark Mangino and his assistant Clint Bowen were admonished by the university, and the football and women's basketball programs will lose scholarships as part of KU's self-imposed sanctions.

"We set very high standards at KU," Chancellor Robert Hemenway said during a media session at the Parrott Complex, "and we are very disappointed we fell short of those high standards."

Hemenway has placed the athletic department on two years of probation and approved the suggested penalties.

KU told the NCAA it will cut football scholarships from 25 to 24 over the next two seasons, as well as limit junior college recruitment. Most of the football violations involved improper monitoring of correspondence work and illegal transportation of student-athletes during the summer of 2003. 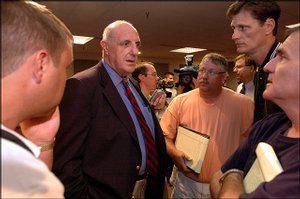 Kansas University Athletic Director Lew Perkins is surrounded by members of the media after a news conference announcing several NCAA rules violations by the program.

"I did not know these violations were occurring at the time," Mangino said in a prepared statement, "but as the head coach I am aware that ultimately I am responsible for the actions of my staff."

Women's basketball grants were cut from 15 to 13 for the 2005-06 season. Most of the violations in that sport happened during the summer of 2002 and involved assistant coach Tim Eatman who is now an aide at Louisville. Then women's coach Marian Washington resigned during the course of the internal investigation, according to the university reports.

Men's basketball fell afoul of the rules mostly because of gifts to graduated players from donors Dana Anderson, Joan Edwards and Bernie Morgan. According to the report, the gifts of cash and clothing, totaling a few hundred dollars per player per season, were presented by those three team supporters after the 2000-01, 2001-02 and 2002-03 seasons to players who had graduated or exhausted their eligibility.

According to the report, Williams said "there were at least two occasions when I was asked by an alum if they could send a gift to one of the youngsters who have graduated in appreciation for what they've done."

Williams said his response to those requests were, "I don't want this to be any humongous check or anything like that if it's truly just a gift for graduation; every graduating senior gets graduation gifts."

According to the report, Williams indicated he thought the gifts were OK because the athletes' eligibility was already completed.

KU officials said those who gave gifts to the athletes thought doing so was within the rules.

"Let me make it clear the donors did nothing wrong," Perkins said. "These people called the (KU) basketball office and were told it was OK."

No sanctions were imposed against men's basketball.

Rick Evrard, an attorney for the Overland Park law firm that conducted the two-year investigation, said he considered the donor violations secondary because KU "gained no recruiting advantage from them."

Perkins hired Evrard's firm after he was told by interim Athletic Director Drue Jennings on Perkins' first day on the job in June 2003 of possible violations. Jennings was filling in for Al Bohl, who was fired by Hemenway in April of that year.

"We have nothing to hide," Perkins said. "If we discover any additional information, we will investigate fully and follow the same procedures."

The NCAA, in a letter dated July 1, informed Perkins it was reviewing the report and conducting follow-up interviews. Hemenway said he was told the NCAA enforcement staff intended to complete this process by the fall.

"Over the past 24 months," Hemenway said, "we have engaged in a thorough process that I am confident has put us on the right track so that we can consistently meet our high standards now and in the future."

"We actively followed up on every piece of information," he said. "We discovered errors and we self-reported them as we are expected to do as members of the NCAA. We wish we did not have to go through this process, but we believe in the process and, in the end, it will make us better."