Kansas University's volleyball players had the time of their lives during a recent school-sponsored trip to Brazil.

"I didn't want to come back. I kind of fell in love in Brazil," junior defensive specialist/libero Jamie Mathewson said. "Everyone had to come out of their comfort zone, and I think people loved it."

Some, such as junior defensive specialist/libero Dani Wittman, plan to return.

"It was a life-changing experience for everybody," Wittman said. "I don't think anybody knew what to expect, but leaving there might have been the hardest thing I've had to do."

Under NCAA rules, teams are allowed one international trip every four years. Under coach Ray Bechard, the volleyball team never had taken such a trip before the coach received the nod from the KU athletic department to schedule a 10-day excursion this spring between finals, graduation and the start of summer school.

While everyone was looking forward to the team's first international trip, three members probably had the biggest grins boarding the plane: Brazil natives Josi Lima, Paula Caten and Jana Correa. 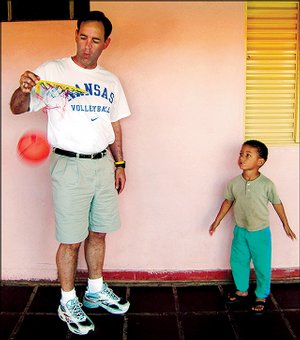 Photos Special to the Journal-World

Kansas University volleyball coach Ray Bechard plays with a boy in Sao Paulo, Brazil. The Jayhawks traveled to Sao Paulo and Rio de Janeiro after the spring semester to bond, have fun and learn about Brazilian culture.

"It was extremely good experience for our team, not only for us but for everybody," said Lima, a senior middle blocker from Sao Paulo.

"This was a different experience for the girls from KU, and I think they enjoyed it very much. They got to experience what we experienced when we first got here (to Kansas)."

"We wanted to accomplish a couple of different things," Bechard said. "The matches were important, but what was extremely important was the cultural experience. The cultural experience was as valuable as anything we did. It was powerful and made a huge impact on players from the United States."

Although the team left the United States on May 23, it didn't touch down in Brazil until the next day. The Jayhawks started their trip in Rio de Janeiro, Brazil's second largest city filled with colorful markets, food and shanties that defied the most of the North Americans' pre-established notions of poverty. 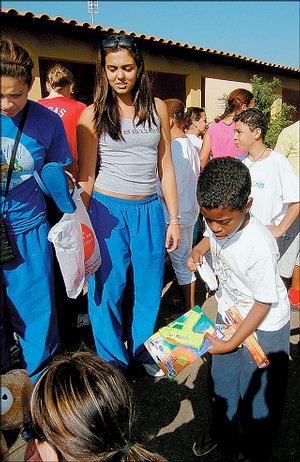 Photos Special to the Journal-World

KU senior middle blocker Josi Lima hangs out in Sao Paulo. Lima, a Sao Paulo native, is one of three Brazilians on the Jayhawk volleyball squad, along with Jana Correa and Paula Caten.

"I really think their eyes were opened down there, because poverty is everywhere you go," Bechard said. "There's a lot of people that don't have very much. They don't have the resources we have. But on the flip side... they make the most of what they have."

Added Wittman: "We don't understand how much we have over here. It's not a perspective you can have until you're over there. Everyone works for what they have and is appreciative of what they have."

During their eight-day stay in Rio de Janeiro and Sao Paulo, the Jayhawks shopped, strolled by the beach and ate exotic foods. Yet despite all the tourist fun, the players most enjoyed interacting with people - such as a trip to an orphanage outside Sao Paulo.

The team bought sandals and other gifts for the nearly 40 orphans, ranging in from age 3 to 18, but the biggest gift may have been the visitors themselves.

"It was unbelievable," Bechard said. "It was just great to see all the joy on all their faces."

The biggest highlight happened right before the Jayhawks headed home. Josi Lima's mother, Maria, invited the team and staff into her home to express her thanks to Bechard and company.

Even if she could have expressed herself through words, the two translators were too choked up to decipher them. 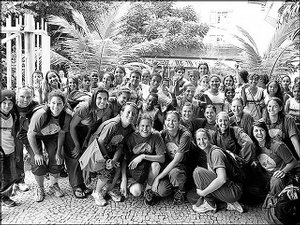 Members of the Kansas University volleyball squad pose with Brazilians in Rio de Janeiro. The Jayhawks traveled to Brazil this spring after final exams.

"I think there was an outpouring of gratitude from both sides," Bechard said of meeting Lima's family.

"He basically thanked us for taking a risk from leaving our homeland and living in another country," Lima said of her coach. "It was very, very emotional : everyone was crying.

"It always feels good to see my family, but I was more happy to introduce everybody to my family."

Mathewson said she could hold off tears - until she saw Maria's face.

"It was just emotional," she said, "because I saw how it felt and how she misses her daughter."

Journal entries from players and additional photos can be found at kuathletics.com.