Lew Perkins says he has not lost any confidence in Kansas University's basketball program or its coach in the wake of the Moon Bar melee.

"I don't think anything is broken. I just think somebody made a poor judgment. These kind of things happen," Perkins, KU's athletic director, said Thursday, speaking after a news conference where it was announced J.R. Giddens had decided to transfer to a to-be-determined school.

Perkins said the "poor judgment" -- Giddens getting involved in a fight in which he suffered a slashed artery in his calf -- by all accounts was an isolated incident.

"I've been doing this for 37 years. I've had some others, a couple of cases even worse," Perkins said, not rehashing specifics of other athletes running into trouble during his administrative career. "That doesn't mean this was good. This was bad. Any time somebody gets hurt, any time people's lives have to change, that's not good.

"These things do happen, I'm sure, at other universities, in the corporate world, newspapers, radio stations. It doesn't mean it's right. I don't want to make it sound like it happens at other places, so it's OK for it to happen here. 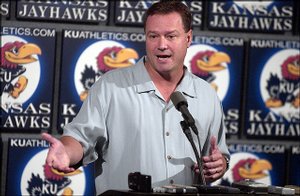 Kansas University coach Bill Self fields a question during a news conference. Self announced Thursday at Hadl Auditorium that junior guard J.R. Giddens was leaving the team and transferring to another school.

"It's unfortunate," Perkins added. "Hopefully you look back over your career and say, 'I may have had five or six kids that hurt the image, but if I have 10,000 who turn out to be doctors, lawyers, I'm pretty happy.'"

Perkins said he had no plans to add new rules or regulations or even stiffen KU's student-athlete code of ethics.

"Will we always try to improve our code of ethics, what we do and how we do it? Absolutely," Perkins said. "This thing will not make us do anything different we wouldn't have done on a yearly basis. It's like the analogy with the NCAA. Every year we change the rules. Every year somebody finds a way to beat the system. We can have all the rules and regulations. It comes down to people."

Perkins said he was considering background checks on all incoming recruits -- checks which would be compiled by the three FBI agents who have been interviewing witnesses of the May 19 Moon Bar melee.

He was asked if misbehaving athletes, who conceivably could cost him his job, were the reason for considering the checks.

"We will do what we think is right to make our athletic department the best in the country. We think we have good kids here."

Perkins said the three FBI agents were hired before the Moon Bar melee.

"We were talking to these people about background checks. When this happened, I asked them if they do this kind of work. Obviously, they are pretty good."

Perkins said KU would not release the results of the investigation of the FBI agents, which is independent of the Lawrence police investigation which has been forwarded to the district attorney's office.

"I don't know if we are ever going to find out what really happened," Perkins said. "Michael Lee (ex-Jayhawk guard) had the most profound statement. He said there were 20,000 people who would have 20,000 different versions. He was a prophet I think."

As far as Giddens' leaving the school, Perkins said he agreed with the decision announced Thursday.

"I talked to Bill all the way through," said Perkins, who has not met with Giddens since the May 19 incident. "The bottom line is what's best for J.R. and the program, do what's best, and I think that's what happened."

Perkins, who still is recovering from recent surgery -- he did not want to discuss the specifics -- wished Giddens the best.

"He's a young man. We still care about him," Perkins said. "People make mistakes. It doesn't mean they are bad people. Bill said he's done things he regrets. Everybody has, myself included. As long as you realize you made a mistake and better yourself, that's what's important.

"An old coach once told me, 'People make mistakes. It's why they put erasers on pencils. If they didn't make pencils with erasers, there'd be a lot of people without a job.'"

¢ Donor has faith: One of KU's biggest benefactors, Dana Anderson of Los Angeles, was confident that KU's program would emerge from the dark times just fine.

"We never like to see any of the young men leave the program," Anderson said. "But I respect coach Self. If he thinks it is the right thing for KU, then I'm sure it is."

Anderson thought the latest situation involving Giddens and the law wouldn't have an impact on the desire for big donors to chip in for fund-raising efforts. He also said his faith in Self hasn't wavered.

"I think he is an outstanding coach, one of the best," Anderson said. "I have absolutely no reservations in any way, shape, or form about the job he's doing. We're going to be fine."