Kansas State defense clamps down in second half as Wecker, Wildcats pull away for 63-45 victory

Coming into its game against Kansas State, the Kansas University women's basketball squad had endured six straight losses to the Wildcats.

The same sad story repeated itself Saturday at Allen Fieldhouse.

An impressive first half against the 20th-ranked Wildcats was wasted when the Jayhawks were badly outplayed in the second half of a 63-45 defeat.

KU cruised to a 17-8 lead early behind a pair of Kaylee Brown three-pointers. K-State crept back in the later stages of the first half, but KU answered the rally and the halftime score was 26-all.

For those 20 minutes it seemed KU seriously could challenge KSU, especially behind the strong defense of forward Taylor McIntosh, who limited KSU's preseason All-America forward Kendra Wecker to six points.

"We felt like we were doing pretty good, like we were rebounding and we knew we had to stay and execute our plays," McIntosh said. "And that's where we fell apart in the second half."

It didn't take long for the Jayhawks to go to pieces. The Wildcats opened the second half with a 17-3 run, and the game was out of reach. 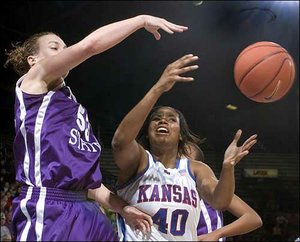 Kansas University forward Crystal Kemp (40) fights for a loose ball with Kansas State's Kendra Wecker during the second half. Kemp was held to 10 points, and the Wildcats beat the Jayhawks, 63-45, Saturday at Allen Fieldhouse.

"At first, it was hard to catch, and when I finally did get the opportunity to (shoot), I was rushing a lot of things." Kemp said. "I just wasn't really there as an offensive threat for us tonight."

KU coach Bonnie Henrickson said not getting Kemp the ball created problems for the Jayhawks offensively.

"We never got that established."

The lack of an inside game on offense forced KU to swing the ball around the perimeter, where good shots equally were scarce. Guard Erica Hallman was goaded into several desperate misses as the shot clock expired.

Even worse for the Jayhawks was that Wecker woke up in the second half, creating a defensive nightmare with 12 second-half points. She led all players with 18. 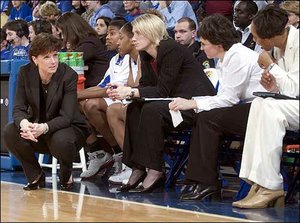 The defeat drops KU to 0-2 in the Big 12 Conference -- the Jayhawks let a close game slip away late against No. 7 Texas on Wednesday. Both defeats have shown that the Jayhawks can play with the Big 12's best teams, but only for a short time.

Henrickson said 20 minutes of good basketball wouldn't be enough in any conference game.

"It's a tale of we've got to be able to put 40 minutes together to beat anybody in this league," Henrickson said. "Not just either Texas or K-State."

KU will play host to Iowa State at 7 p.m. Wednesday at Allen Fieldhouse. 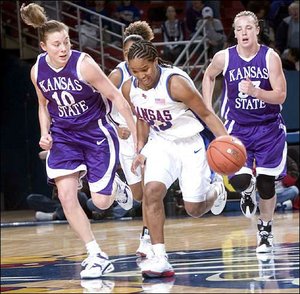