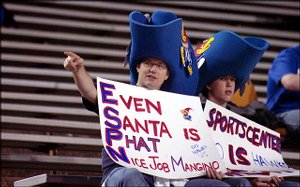 The Jayhawks recorded their first winning season in a decade with a win in the Fort Worth Bowl.

Fort Worth, Texas — For the first time in a decade Kansas University's football ended its season with a winning record.

The Jayhawks finished 7-5 thanks to their first bowl win in 10 years as KU defeated Houston 42-13 Friday night in the Fort Worth Bowl at Amon G. Carter Stadium in Fort Worth.

"It was a great night," KU coach Mark Mangino said.

Kansas senior Jason Swanson was named MVP for the Jayhawks, while Houston senior quarterback Kevin Kolb took the award for the Cougars.

Swanson set a Fort Worth Bowl record with four touchdown passes. Two other Jayhawks -- Brian Murph and Jon Cornish -- had multiple touchdowns as Kansas tallied its highest point production of the season.

Swanson completed 19-of-29 passes for a career-high 307 yards and the four scores. Swanson's passing yards were also a Fort Worth Bowl record.

"That was a huge win for us," Swanson said. "We practiced for three weeks and have been going at it since last November, so it was sweet to have something at the end of the tunnel for us."

With his 20 completions, Houston's Kolb moved past former Heisman winner Andre Ware into fourth place in Cougar history. He also became just the second Houston player along with David Klingler to throw for 9,000 yards in a career.

"I don't think the score is indicative of tonight's game," Houston coach Art Briles said. "We had some bad things happen. We didn't coach or play very well so that's why things turned out the way it did."

Jon Cornish rushed for 101 yards on 16 carries, and caught two passes for 43 yards. Both grabs were good for touchdowns.

"Jason played very well," Mangino said. "He did a great job. I'm proud of Swanny's effort, as I am proud of all our kids tonight."

While Charles Gordon led KU with 86 receiving yards, Brian Murph grabbed four balls for 78 yards and a score. Murph got the Jayhawks on the board first when he returned a Houston punt 85 yards for a touchdown.

Kansas racked up 538 total offensive yards, while Houston was limited to 244 yards.

Houston was held to just 30 yards rushing on 24 carries, while the Jayhawks turned out 198 yards on the ground on 39 rushes. UH's top back, Ryan Gilbert, who was averaging 93.6 yards per game and had rushed for 1,030 yards on the season rushed for only seven yards on nine carries.

"Our defense shut the run down," Mangino said. "They did a nice job of dinking and dunking for a little while. But our guys wore them down up front."

After the game KU senior linebacker Nick Reid said the emotional victory hadn't even sunk in yet.

"We've come a long way. It's pretty neat to be a part of the foundation (of KU's improving program)."

Big plays have been the key Friday night for Kansas University in its contest against the Houston Cougars.

Brian Murph added the latest highlight when he hauled in his second touchdown of the game, a 48-yard pass from Jason Swason -- who set a Fort Worth Bowl record with his fourth touchdown pass.

KU got the ball back when Theo Baines picked off Kevin Kolb' for the second time in the game.

KU defensive end Charleton Keith made an amazing interception before returning the ball 14 yards into the end zone to give KU a 35-13 lead with 12:23 to go in the Fort Worth Bowl.

The 35 points by Kansas are the most ever in the Fort Worth Bowl.

Earlier in the contest, Webb missed a field goal that bounced off the upright.

Jason Swanson threw his third touchdown of the game, this time finding Mark Simmons for a 32-yard score over the middle.

The Jayhawks senior made a quick cutback move outside of the 20-yard line and sprinted into the end zone to give KU a 28-13 lead with 4:57 left in the third quarter. The Jayhawks scoring drive covered 80 yards on nine plays.

Kansas cornerback Theo Baines picked off Houston quarterback Kevin Kolb on the Cougars first drive of the second half and returned the ball 16 yards to the Houston 30.

KU wasted no time getting on the scoreboard either.

Jon Cornish took another shovel pass from Jason Swanson and scooted 30 yards for a touchdown to give KU a 21-10 lead in the third quarter.

Houston drove 66 yards on 12 plays and got three points on a 44-yard field goal by T.J. Lawrence. The long field goal was the furtherest kick in UH bowl history. It was also the longest kick in Fort Worth Bowl history.

Kansas has outgained Houston 231 yards to 124, but the Cougars grabbed back momentum at the end of the first half when they cut KU's lead to just four.

A KU drive ended on a fumble and Houston came right back the other way with a touchdown run by senior quarterback Kevin Kolb.

Kansas has rushed for 78 yards on 17 carries, and the Jayhawk defense has limited Houston to 15 yards on 15 carries.

Kolb has completed 11-of-21 passes for 109 yards, and rushed for Cougars' lone score.

Kansas was looking to add another touchdown before the half, but on a third-and-10 at the UH 29-yardline, KU quarterback Jason Swanson fumbled the football when Cougar defensive end Phillip Hunt punched the ball loose.

UH linebacker Brendan Pahulu picked up the ball and returned it 27 yards to the KU 42-yardline.

Kolb pushed forward, but it was questionable to whether or not he crossed the goalline. A referee signaled the score and after officials reviewed the play, there was no indisputable evidence to overturn the call on the field.

KU's Jon Cornish gave the Jayhawks a 14-3 lead after taking a short shovel pass from Jason Swanson out of the back field and sprinting 13 yards into the end zone.

Cornish had a 12-yard run on the five-play, 60-yard drive and Charles Gordon had a 23-yard pass reception the play before the touchdown.

KU's defense batted down two passes after Houston drove 66 yards on 16 plays down to the Kansas 14-yardline.

But Houston kicker Ben Bell got the Cougars on the scoreboard when he connected with a 32-yard field goal.

Kansas kicker Scott Webb missed a field goal that would have given KU a 10-0 lead in the first quarter, when Webb's kicked bounced off the right goal posts.

KU had a first and goal from the Houston eight-yardline, but couldn't get in.

A option to Clark Green was good for four yards, but then Jason Swanson threw two incomplete passes setting up the Webb kick.

What looked like a big mistake by Brian Murph turned into a spectacular touchdown return for the Jayhawks in the first quarter of the Fort Worth Bowl Friday night at Amon G. Carter Stadium in Fort Worth, Texas.

Murph dropped the ball as he tried to catch it at the KU 20-yard line, but regained the pigskin five yards further back before heading up field. Right at midfield, the KU junior cut back across the pitch behind a convey of blockers to give Kansas a 7-0 lead with 10:26 left in the first.

The 85-yard TD return was a Fort Worth Bowl record.

After two big pass plays to start the game, KU gained no yards rushing. Mark Mangino chose to go for it on a fourth-and-11 inside Houston territory, but Charles Gordon came up a yard short on a reception.