Brandon Blaney never considered surviving on $600 a month a sacrifice.

That's good, because he did it for three years as a graduate assistant football coach.

"I never looked at it as hanging in," said the 26-year-old Kansas University offensive line coach, in his first season as a full-time coach. "When you look at something as hanging in, I don't think somebody can be real enthusiastic about what they're doing."

Make no mistake, Blaney is enthusiastic. His father, Chuck, was a high school coach in Ottawa and Blue Valley, among other places before settling into a role as an athletic director in Aliquippa, Pa.

"It's in my blood," Brandon Blaney said.

Playing football, however, wasn't in his genes.

"I worked so hard as a high school player, but God didn't give me a lot of ability," said Blaney, a graduate of Lamar (Mo.) High. "There wasn't a lot of demand for a 190-pound center/nose guard coming out of high school, but I knew that I wanted to be a coach."

A friend of the family called Youngstown State (Ohio) on Blaney's behalf and talked to assistant coach Ken Conatser, who then told Blaney about the glamorous life of a student assistant.

"They needed somebody to run errands, make copies, do whatever needed to be done," said Blaney, who was moved from tight ends coach to offensive line coach this week when Conatser resigned. "In exchange for that, they let me sit in on meetings, let me work in practice and help out. When you're a I-AA school you don't have a lot of support people, so there's a lot of opportunities to get your hands involved in it." 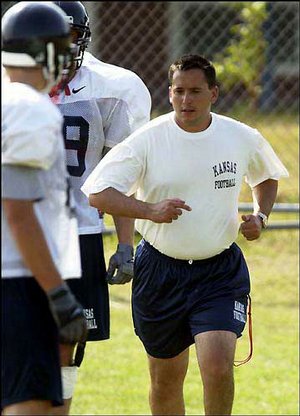 Kansas assistant Brandon Blaney, seen during two-a-day practices last month, says being a football coach is in his blood. He was moved from tight ends coach to offense line coach this week.

Blaney worked for head coach Jim Tressel from 1995 to 1998, including the Penguins' 1997 I-AA national championship team. He was poised to move into the role of graduate assistant in 1999, but while working a camp at Oklahoma one of the Sooner graduate assistants left to take a job at Wyoming.

"Coach Tressel was good enough to let me go and let me break the commitment I had at Youngstown State in order to get out there to Oklahoma," Blaney said.

When Tressel left Youngstown State to take the head coaching job at Ohio State after the 2000 season, Blaney headed for Columbus to be a linebackers graduate assistant.

While GAs gain invaluable experience, they make enough money to cover tuition and rent, but little else.

"You just live frugally," Blaney said. "Those ramen noodles become a staple of the diet."


How will the Jayhawks fare against Southwest Missouri State on Saturday?

His persistence paid off. When Mangino was hired as KU's head coach last December, Blaney was one of his first hires.

"I knew I wanted to hire him right after I got the job because I was impressed with the job he'd done for us at Oklahoma," Mangino said. "He's a real hard-working young man. He's a real loyal, conscientious guy. He just loves football. He's going to be a bright star in this profession some day."

The first-time, full-time assistant won't have to live frugally this year with a salary of $79,500.

"I really think of myself as fortunate," Blaney said. "When I was 19, I started making copies at I-AA Youngstown State and ended up here a few years later. I worked my tail off, but I was also fortunate enough to work with some really good coaches and some really good staffs along the way."