Russell, Ontario, Canada, actually heaved the weight a record-setting distance of 80 feet, 41*4 inches, only to have the mark wiped out because his ball-and-chain contraption was two millimeters longer than is allowed because a string broke on the netting that holds the ball. 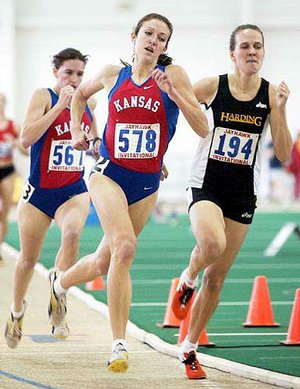 Kansas University's Laura Lavoie (578) makes her move in the 800-meter run at the Jayhawk Invitational on Friday at Anschutz Pavilion. Lavoie won in 2:10.77.

Although the throw didn't count as an NCAA record, it was more than enough 21 feet, 6 inches, to be exact to win the event at the Jayhawk Invitational at Anschutz Pavilion.

"The ball was two millimeters long, so it's not the record anymore," Russell lamented. "It's just another long throw that doesn't count. I'm not disappointed about it at all because it's still early in the season and we haven't started tapering out yet. I can't complain with how I threw."

Russell automatically qualified for the NCAA Indoor Championships a couple of weeks ago with a toss of 77-91*2 to win the Missouri Triangular. Now he's setting his sights a little higher.

"An NCAA championship, that's been the goal from the start of the season," Russell said. "Without that, my season's incomplete."

The weight throw, also called the hammer throw or ball-and-chain event, takes place in an area similar to a shot-put ring. On Friday, the ring was set up on the 50-yard line of the football team's practice field, with a short, wooden wall located inside the 20-yard line.

Russell's first and final throws arched lazily down field before bouncing off the turf and slamming into a Jayhawk painted on the center of the barrier.

Russell swears he wasn't aiming for the KU logo.

"Where ever it goes right, left, center so long as it's far."

Russell, who broke the Canadian record in the javelin toss at the World Championships last summer, started throwing the hammer during the outdoor season in high school. After coming to Kansas, he injured his right shoulder during his freshman season and only could train for the weight throw because it's a "left-handed event."

Russell has steadily improved in the weight throw while at KU, claiming the best throw in the nation at the time of his NCAA-qualifying throw at Mizzou.

On Friday, the 6-foot-9 Russell was head and shoulders above the competition again.

"I can't complain, can't complain at all," Russell said. "It's early. We didn't attempt to peak for this meet. With the tough training week we had and I didn't have great throwing practices, to throw 80 feet with a ball that was two millimeters long I'm not going to complain at all. I'm definitely pleased with it."