Still smarting after all these years

On March 23, 1957, in Municipal Auditorium in Kansas City, an undefeated band of toughies from New York City playing for the University of North Carolina defeated sophomore Wilt Chamberlain and Kansas University, 54-53, in three overtimes. On that day, a wound was opened that to this day festers. Read on... 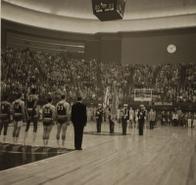