Jayhawks get past Canada in first exhibition

Kansas City, Mo. — In its first attempt at taking on the world, the Kansas University men's basketball team opened up its opportunity to represent the United States in next month's World University Games in South Korea with a 91-83 victory over Team Canada at Sprint Center.

In a game that clearly meant something to both teams and occasionally featured chants of “U-S-A, U-S-A” from the 8,000 or so fans who packed the arena, the Jayhawks had to go all the way down to the wire to pick up the victory.

Frank Mason III (26 points overall and 14 in the fourth quarter), Perry Ellis (17 points, 8 rebounds) and Wayne Selden Jr. (13 points, 6 assists) all made some clutch plays on both ends down the stretch to help KU hold off the Canadians.

SMU senior Nic Moore started at the point for Kansas and looked very comfortable helping run Bill Self's offense and push the pace all night. He finished with nine points and five assists before fouling out.

Tuesday's exhibition also gave KU fans their first look at newcomers Carlton Bragg and Legerald Vick, who each had their good moments and mixed them in with a few, classic freshman mistakes.

Bragg, who showed great touch on his jumper, finished with four points and four rebounds, and Vick, who ended the first half with a hard-driving layup at the buzzer, scored four.

Stay logged on to KUsports.com throughout the night for much more from tonight's game.

• The game turned when: KU stormed all the way back from an early, 10-point deficit to take a one-point lead midway through the third quarter. Selden hit a couple of buckets from behind the three-point line to spark the run that gave Kansas a five-point lead after three quarters.

• Offensive highlight: As is almost always the case, there were a couple of lobs that brought the Sprint Center crowd to its feet and both of them involved KU junior Selden. The swingman was on the finishing end of the first one, as he caught a lob from Mason and flushed it early in the game. After the dunk, Mason looked to the crowd and tried to get people to get loud. Later in the first quarter, Selden tossed a perfect pass to Ellis on the backside for an easy, two-handed jam.

• Defensive highlight: Midway through the final quarter, with things tight on the scoreboard and both teams beginning to battle a little harder on every possession, senior Jamari Traylor rejected a layup attempt by Canada's Jahmal Jones. Instead of the Canadians going up three, KU went up one when Mason finished a tough layup on the other end after the Traylor block.

• Key stat: KU and Canada combined for nearly 140 field goal attempts, a clear sign that the 24-second international shot clock has a serious impact on the game. That gives you some kind of indication of what the college game's move to a 30-second clock (from 35) will do this winter.

• Up next: Before heading to Korea on Sunday, the Jayhawks will play one more exhibition against this same Canadian team at 7 p.m. on Friday at Sprint Center.

Is there a score card or something online?

We'll see if Canada can steal the title belt, but for three days, KU wears it.

Rematch on the 26th

Watch who you're calling out, young man.

Frank Mason with his best Steph Curry impersonation down the stretch. Impressive start to the summer.

Traylor contests a 3 and Mason pulls down a defensive rebound after blocks from Selden and Ellis. KU up 4, :28 left.

Pepper_bar in reply to Texashawk10_2

Yeah, I think a unique tri-color banner would be appropriate and well earned. IF they win, of course. That is no given.

It's a block party in KC! Traylor and Ellis with big rejections in the paint.

Selden and Ellis come up with shot blocks off Canada penetration. KU still on D...

Wild applause for Ben McLemore on the video board.

Texashawk10_2 in reply to Pepper_bar

I wouldn't hang one like the national title banners, but something acknowledging it on the north end with some of the other achievements.

Up 2 with a minute left, Mason dribbles right and pulls up for a jumper. Dominating the Canadians.

Just calling me out!

If KU wins the WUG, will they hang a banner?

Four assists in the second half, too.

Pepper_bar in reply to Texashawk10_2

Fair enough, Tex. Like I said, it hits me in a Picasso-esque way, I'm not surprised others don't see it.

It is not. Neither is Friday's.

Texashawk10_2 in reply to Pepper_bar

As a Texan, that doesn't look like a Texas flag to me. It looks like a French flag with stars at each end of it.

Is this game televised?

Frank Mason just willing Kansas to a lead. Hits 3 from up top after long rebound. 24 points for the PG.

Pepper_bar in reply to Benton Smith

Not trying to be a jerk with the Texas flag thing. I just noticed it the instant I saw the unis but I haven't seen anyone else mention it.

First adjustment to FIBA rules. Mason called for 8 seconds walking the ball up the court in final 3 minutes.

Pretty impressive to see how Nic Moore has gelled with his new teammates in a month. Fits right in alongside Mason.

Ha! You're the first to bring it up that I've seen.

Evening dudes! Anyone talking yet about the deconstructed Texas flag on the KU road uniforms? Go Kansas/Texas/USA!

Marshan3q in reply to Bobby Nightengale

not bad for a summer exhibition. sounds like the fan there are bringing it.

Bobby Nightengale in reply to Marshan3q

Haven't seen a number yet, but not a ton of open seats. I would guess 85-90% full for lower bowl.

2 Moore FTs tie it back up.

No announced attendance yet but lower bowl of Sprint is mostly full.

Canada back out in front with 2 FTs.

Marshan3q in reply to Bobby Nightengale

for sure. it's pretty loud in there for what was a quote "small crowd"... how many people came out?

Tie game after Ellis goes to the foul line.

Bobby Nightengale in reply to Marshan3q

Ha, a lot of basketball coming in the next 3 weeks.

Perry Ellis remembers he's the best player on the floor and just attacks the paint from the right side, gets to the FT line.

deep down i really want this to go to OT. Never want this to end. The rational side of me just wants the Jayhawks to win

Mickelson falls asleep on defense and Canada gets an easy, back-door layup from Tommy Nixon.

Evan Manning checks in with 7 minutes left and Mickelson in for Bragg. Self getting lots of guys minutes. Which is kind of the point of an exhibition.

Mason tried a 3/4 of the floor TD pass to streaking Selden and over-threw him, turnover out of bounds.

Tight game, 4th quarter, and Bragg and Vick are on the floor for KU. Great experience for the youngsters.

For sure. Bragg has hustled, too. Hit the floor for a loose ball earlier. KU's front court is going to be deeeeep.

Canada's Aaron Baker also slow to get up following the collision. Had to be helped to the bench. He grabbed the back of his head and trainers checked out his right hand before he went to the locker room.

Baldjedi in reply to Benton Smith

From what I have been listening to, Bragg looks like he could make a big difference this year, and Vick is still raw, but hustles.

Landen Lucas slow to get up, grabbing his right arm after trying to take a charge. Heads to bench...

Confident, fearless for both. Bragg a little more polished. Vick took at least one bad/ill-advised shot.

KU running into some foul trouble. Selden with 4, Nic Moore with 3 and Julian DeBose with 3. 9:17 left.

What is your analysis of our freshmen so far?

KU has 12 offensive rebounds with more than a quarter left: 4 for Traylor, 2 for Lucas, ellis & Mickelson.

Ellis beats Canada big men down the floor, and then grabs a deflected pass over the top to finish in transition.

Canada has missed 5 of last 6 attempts.

Seven and a half minutes into the 3rd quarter: Nine points for Selden, eight for Mason and two for Carlton Bragg. 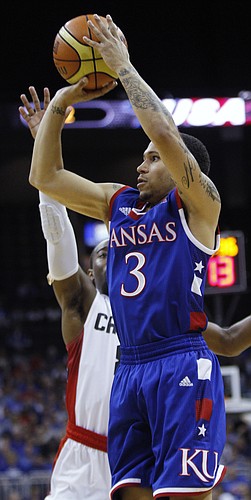 Team USA guard Nic Moore (3) takes a shot in the first-half of a Team USA exhibition game against Canada Tuesday, June 23, at the Sprint Center in K.C., MO. by Mike Yoder

Huge ovation for Frank Mason when he exited the game. Mason now leads KU with 12 points. 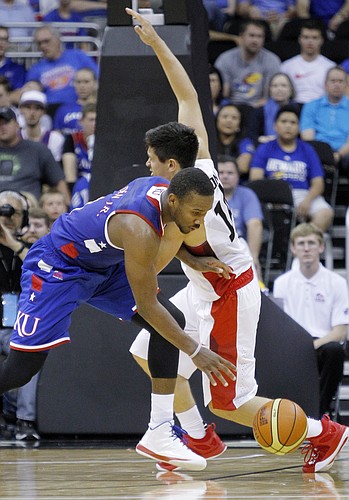 Kansas guard Wayne Selden Jr. (1) gets a foul called on him going for a steal against Canada forward Tommy Nixon (14) in the first-half of a Team USA exhibition game against Canada Tuesday, June 23, at the Sprint Center in K.C., MO. by Mike Yoder 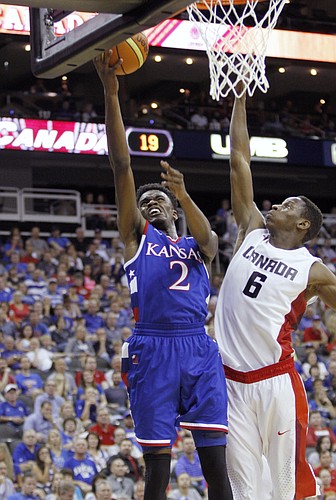 Kansas guard LaGerald Vick (2) drives to the basket in the first-half of a Team USA exhibition game against Canada Tuesday, June 23, at the Sprint Center in K.C., MO. by Mike Yoder

Bragg makes another jumper from deep (inside the arc) and KU leads 52-51. 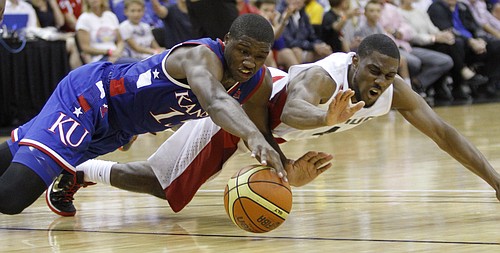 Kansas forward Carlton Bragg, left, hits the floor for a loose ball with Canada guard Jarred Ogungbemi-Jackson in the first-half of a Team USA exhibition game against Canada Tuesday, June 23, at the Sprint Center in K.C., MO. by Mike Yoder

2 first-half fouls on Vick, Selden and Bragg for KU/USA.