It began as a classic match-up between the No. 9 and No. 15 teams in the nation and the two preseason favorites to challenge for the Big 12 championship.

And it played out more like an MMA match, with technical fouls, pushing and shoving and plenty of extra-curricular activity.

When it was all said and done, though, the strength of KU's incredible first half carried the Jayhawks to a 80-78 victory over Oklahoma State at Allen Fieldhouse.

Oklahoma State responded with a fast start to the second half and KU's 47-30 halftime lead was trimmed to 59-56 midway through the second half. KU coach Bill Self used several early timeouts in the second half to calm his team down and it appeared to work when Naadir Tharpe and Frank Mason calmed the home team down with back-to-back three-pointers that pushed KU's lead back to seven (65-58) with nine minutes to play.

OSU closed hard and cut it to one with 5.4 seconds to play but could not get over the hump.

Tharpe turned in another solid scoring day at the office to lead Kansas with 21 points.

Joel Embiid flirted with triple-double territory by putting up 13 points, 11 rebounds and 8 blocks.

KU's win, coupled with losses by OSU and Iowa State (86-76 at Texas) put KU in the driver's seat in the Big 12 Conference race. In fact, their position right now is so comfortable there might not be anyone even sitting shotgun.

• The game turned when: Kansas responded to the Cowboys closing KU's 17-point halftime lead to just three points, 59-56, midway through the second half with a 14-4 run, which pushed the lead back to double figures and allowed the Jayhawks to cruise home a little more comfortably.

• Offensive highlight: With the Jayhawks enjoying an 11-0 run, Naadir Tharpe came up with a steal in front of the KU bench and pushed the ball right back at the OSU basket, with the crowd in a frenzy. As Tharpe drove it all the way under the OSU hoop, he turned around and quickly saw Tarik Black charging down the paint. Tharpe flipped it to Black, who flushed it with two hands and sent the Allen Fieldhouse fans into an uproar. Seconds later the two benches had to be separated by coaches and officials and the bad blood began to boil over. Of course, there also was the Joel Embiid alley-oop dunk all over Marcus Smart that will probably be talked about around here for years.

• Defensive highlight: With 6:11 remaining in the first half, Marcus Smart drove into the heart of KU's defense and dished a perfect pass to Kamari Murphy on the doorstep of two points. Murphy waited for a soaring Wayne Selden to clear and then went up strong to slam the ball through the rim. One problem. Joel Embiid was standing there waiting for him. Embiid got it with one hand and no contact and the Jayhawks went out in transition yet again.

• Key stat: 3-for-14 shooting for OSU guard Marcus Smart, who finished with 16 points thanks largely to 10 trips to the free throw line, where he hit all 10.

• Up next: The Jayhawks will dive back in with another big-game atmosphere at 8 p.m. Monday, when the Baylor Bears come to town for Big Monday.

How many technical fouls were there total?

Until today, I was fine with Oklahoma State and thought they were a program that conducted themselves with class. Not anymore. The way they were throwing temper tantrums and with Marcus Stupid flopping like a fish out of water, I have lost all respect for the Cowboys basketball program. Crap like this would never have been tolerated when Eddie Sutton was in charge. I guess that's how they play basketball at Oklahoma State now. Speaks volumes for the character of Travis Ford that he would put up with such nonsense.

Ford IS a jerk. But if you're OSU, that's what you want: that edgy kind of personality that's always pushing. Ironically, if you're Kansas that's what you want out of Ford, too. I actually like the fact that the brand of basketball is changing in the Big 12, getting tougher and nastier. It'll push Kansas to stay ahead. You need personalities like his to stoke competition.

I'd have to go with the obvious for the defensive play of the game and say Mason stripping Nash at the end to seal the win. That was an incredibly gutsy play because what happens if Mason fouls and sends Nash to the line to win the game that way. 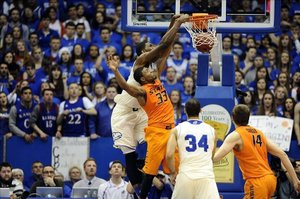 Payback for the backflip - Getting posterized! by Bryce Landon

I started Facebook today just so I could come back on here and say to the world that Marcus Smart is the biggest weenie ever. The foul he got called on Black was unbelievable. He just throws his body around and yells then gets 2 points for it. I have zero respect for him after that game.

Marcus Smart may have a career in Hollywood after the roundball career ends. Too bad the refs couldn't tell the difference.

A couple of bad calls benefitted the 'hawks too, and its a tough job during heated games I know. All the same, there are more than a few clips from this game that would be embarrassing to me if wore those striped shirts

Thought Traylor played well. The double tech call and then the double foul call were both ridiculous. If refs had simply called tech against the OSU player for throwing his shoulder into Traylor as they should have it might have sent a message and stopped some of the other extracurricular activity. I also don't get how they called a block, which was the obvious correct call, then turned it into a double foul. I think all the junk Smart and company were doing was an international plan to try to intimidate KU. Get under their skin. It worked too. Aside from Fortes 3s, the only reason this game was close was the refs allowing the classless behavior. They didn't just allow it, they rewarded it.