Six players reached double digits in scoring and the Kansas University men's basketball team improved to 9-1 with a 96-69 victory over a scrappy Lafayette team Saturday at Allen Fieldhouse.

Kansas raced out to a 24-11 lead during the first 10 minutes of the game and looked to be on its way to an easy victory. But the Leopards (7-3) never got discouraged and just kept shooting. Eventually, those shots started falling and KU's lead was in the 8- to 10-point range for much of the next 15 minutes.

It was Kelly Oubre Jr., however, who led everyone with 23 points in 25 minutes. Oubre was 9-of-15 from the floor and 4-of-7 from three-point range. He also grabbed 10 rebounds in what was by far his best game as a Jayhawk.

• The game turned when: KU responded to the Leopards cutting the lead to 57-49 with 13:01 to play with a 10-3 run to push the Jayhawks' lead back to 15. That run eventually turned into a 28-8 run and KU led 85-57 with five minutes to play. KU's defense was a big part of the run. Lafayette opened the first nine minutes of the second half shooting 69 percent or above. That number dropped by nearly 20 percent during the stretch that clinched the game.

• Offensive highlight: A harmless inbounds play by Lafayette under the KU bucket quickly turned into a highlight-reel slam on the other end by Selden. As Lafayette's Bryce Scott broke down the lane and looked to be wide open for an easy connection, Evan Manning jumped in front of the pass from out of nowhere, grabbed the ball and quickly pushed it ahead to Selden, who went right to the rim and finished with a double-clutched slam dunk to give KU 96 points and Selden 12.

• Defensive highlight: We all know that Mason's not afraid to get in there and rebound, but now we know the KU point guard is willing to play the role of the rejector, as well. Early on in Saturday's victory, Mason stalked Lafayette guard Nick Linder as he drove to the rim on the right side of the lane. After getting all the way to the basket, Linder went up for what looked like it might be an easy layup, but Mason went up with him and swatted the shot off the backboard and grabbed the rebound himself. That led to an easy bucket on the other end for Kansas and was the start of KU's run to a double-digit lead.

• Up next: The Jayhawks will travel to Philadelphia for their final game before Christmas on Monday against Temple, at the Wells Fargo Center. Tip-off is scheduled for 6 p.m. and the game will be shown on ESPN2. After that, KU will close out 2014 at Allen Fieldhouse on Dec. 30, when the Jayhawks welcome Kent State to town for a 7 p.m. game on Jayhawk TV.

It appears not. I was disappointed that Campo was not retained.

Did Beaty try to keep Kiesau and Campo?

Bwag in reply to Benton Smith

He looks pretty smooth getting those numbers. Hopefully we can tighten up some defense and make it work against tougher competition.

Calipari is really upset and pulling his starters. UCLA has now scored 14.

That'll be the key. And KU needs him. And Big Cliff, of course.

Huge game. Now let's see if he can string together a couple more.

He might have to play all 40 minutes on senior night until he does.

Landen Lucas, who started the game, has played all of 4 minutes since.

Wayne needs to let Manning run the point to get him experience.

Benton called the coming out party! 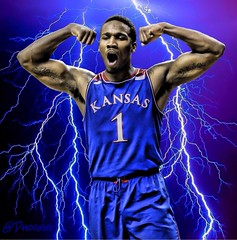 Crazy to think about how Kelly Oubre looked/played in Orlando. And how he looks/plays today.

Self didn't seem to think anybody would red shirt. Devonté Graham remains a possibility (medical) if they determine his turf toe is too serious to return.

Benton will anyone redshirt this year?

UCLA was 3 for 37 in the first half - yikes. Makes us look like the Globetrotters.

Big Cliff was down on the floor. Limps off, looks like some kind of right ankle injury.

Kansas has knocked in 5 of 9 three-pointers this half. Same as Lafayete.

We would be in trouble with Wayne at the point full time.

Lafayette is shooting well from the outside, but we're not too bad either.

Another nice rebound for Mickleson

awesome that Ooooobre is breaking out

Mickelson might not come out til this game is totally out of reach. Self rewarding him for strong play.

There's your answer about Ellis, and Hunter erases his mistake

Did I just see this right? Kentucky up 41-7 at halftime vs. UCLA? Yikes.

Frank Mason has 6 points and 3 assists since the break. 1 steal and 1 turnover.

7 second-half minutes for Mickelson, leads all KU bigs. He's made 2/3 FGs this half.

Self will put Cliff back in, but will we see Perry/Lucas in the last 8 minutes?

Kentucky with a five touchdown lead at half. Oh, wait, that's a basketball game.

Traylor and Perry both got that one dribble and drive move down pack! 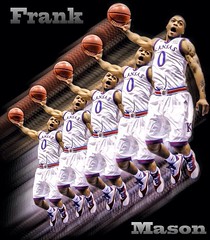 KU looking good with Seldon and Ellis on the bench. Good to see the depth of this team paying off when some starters aren't playing well.

I'm watching a blacked out version of the ESPN3 feed

glad they decided to finish the game , lol

I think I'm ahead of everyone for a change.

Hunter with the spin jumper

Does Elis Perry change his name to Elves Perry during December?

Interesting lineup: Mason, Greene, Svi, Traylor, Mickelson. Playing well together here in the 2nd half, too.

what is it about second halves on Sat. afternoon.

Hunter just used Ellis's move only he went over the right shoulder.

that's enough of that

Can we pretty please string together two good halves in the same game?? Wow.

On D we're getting beat off the dribble and not staying in front of our men. Extra pass killing us.

Greene was just destined to come off the bench. Knocks in his first 3-point attempt like he so often does.

We might want to play some defense. Are the folks that just came in get much of a chance to see if they can do so?

Brian Powell in reply to Maximus140

to compensate for the lack of touch :D it was still long!

*Now 7 of last 7 FGs for Lafayette

Jamari's hair is actually wilder than Hunter's. Not quite as crazy as preseason Wiggins.

No 7 of last 7 FGS for Lafayette

Hunter with a fade away shot? Why is a 7 footer doing that opposed to just jumping straight up.

Ugh, KU doesn't play so hot when they're up by 20. Bring back Hunter/Jamari!

You got your wish. Happy holidays.

Ellis needs to go back to the bench. Today we are not a good team with him in the middle.