KU gets physical and blasts Georgetown, 86-64

It was a slug fest and one that Georgetown controlled in the early going. But by game's end, it was the Kansas University men's basketball team that stood in the center of the ring with its arm raised following a 86-64 victory in the first ever meeting between these two programs in Allen Fieldhouse.

Joel Embiid (17 points, 8 rebounds) paced the Jayhawks in the first half on both ends and a strong effort from senior Tarik Black, who finally avoided foul trouble, and finished with 17 points and 6 rebounds to help push the 18th ranked Jayhawks to 8-3 in their first home game since Nov. 22.

Georgetown fell to 7-3 and 0-1 in true road games this season.

Both teams flexed their muscles throughout this one, particularly in the paint, where the officials let a lot of contact go and let the players settle things themselves. It had the look of a classic Big East game and, in many ways, might be exactly what this young KU team needed.

Here’s a quick look back at some of the action. Be sure to check KUsports.com throughout the afternoon for all of our coverage:

• The game turned when: KU responded to its largest deficit of the day (21-15) with an 8-2 run to tie the game. The hole was not huge but KU looked a little rattled during the stretch in which Georgetown built the lead. Led by Naadir Tharpe and Embiid, KU kept its poise and responded by closing the half on a 29-13 run to go up 10 (44-34) at the break.

• Offensive highlight: With both teams battling for everything they could get, KU picked up an easy (not to mention stylish) two points on a sweet alley-oop dish from Naadir Tharpe to Tarik Black. Tharpe used a quick cross-over dribble to blow by his man at the top of the key and as the defense collapsed on the drive, he flipped it over the top to Black, who hammered it with two hands. It may have been the play that sparked the return of Black's confidence.

It should be noted that the above entry was written before Frank Mason's ridiculous, over-the-head alley-oop pass to Wayne Selden with a few minutes remaining. That was a highlight. <<<

• Defensive highlight: With just over 10 minutes remaining in the first half and the shot clock winding down on a Georgetown possession, the Hoyas' Aaron Bowen caught the ball in the corner and drove hard to the rim for what looked to be an easy dunk. KU's Joel Embiid had other ideas, though, as he hustled across the lane, met Bowen in mid-air and rejected the two-handed dunk attempt with one hand. The block sparked a KU run that turned a six-point Georgetown lead into a eight-point KU lead seven minutes later. Tarik Black also had a sweet block — on his man — in the second half.

• Key stat: The Jayhawks shot 54 percent from the floor and that was huge (particularly because they got a bunch of shots at the rim) but the discrepancy in bench points was even bigger, as KU's bench outscored Georgetown's 33-15.

• Up next: The Jayhawks will enjoy a few days off for winter break and will return to Allen Fieldhouse Dec. 30 for a 7 p.m. match-up with Toledo. Box Score

Perses in reply to Tyler Daniels

But he keeps making the same mistakes and I'm sure he's making them in practice as well. I'm prett Self knows exactly what he's doing.y sure

Good to finally see a strong performance from Black and another good one from Traylor. Normally I wouldn't condone a player throwing a ball at another player, but when Wiggins did it, it was good to finally see some fire in him! I know not all players are wired the same way, but I have never seen a player at least appear to be as emotionless and nonchalant as Wiggins seems to be when he plays. What KU lacks in experience and shooting I think will be made up with quality depth come Big 12 and tournament time. Rock Chalk Jayhawk!!!

Todd Simpson in reply to Mojayhawk

Mojayhawk in reply to Matt Tait

Thanks. The blow to the head was really concerning. His free-throw afterward was scary.

Mojayhawk in reply to Matt Tait

Matt, what do you hear about Perry?

Just got here. Any word on Perry?

I think that's part of the how good we "can" be.

Bwag in reply to Eddie Saldanha

Self empties the KU bench...

In that discussion of how good we can be, they never mentioned turnovers. That seems to be our Achilles heel.

So much frustration on Georgetown's part now. Almost feel bad for them, but they've played too physically all game and put themselves in foul trouble.

That was filthy... Mason over his head to Selden. Wow.

Time to put Starks on his ass when he drives

Wiggins now with 12 points. Been pretty quiet, but hit a couple of big shots.

Another Georgetown player fouls out (third today) and Embiid with the tongue wag after the and-one. That's how you know things are going well, I guess.

In case you missed this one.... Sums up the game pretty well. 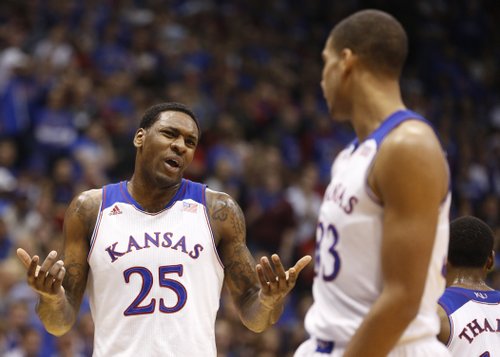 Kansas forward Tarik Black (25) and Landen Lucas discuss a gameplan during the first half on Saturday, Dec. 21, 2013 at Allen Fieldhouse. by Nick Krug

Can't throw elbows in football they got helmets

Unfortunately, ESPN will probably wrap all of Embiid's highlights into one.

We need to try to recruit some of these Georgetown basketball player for our football team, they definitely know how to tackle and play physical!

Jayhawks just trying to get to the finish without any catastrophes now... Hoyas still playing physical ball.

so good to be home right now

NBA all star in a few yrs

Georgetown players telling each other "When you set a screen, hit somebody."

Highlight dunks are the mere result of bad block outs.

Let's leave a 30-point welt on these thugs.

You gotta remember he's hobbled by a couple of minor injuries right now... At full strength, he's anything but slow.

Yeah, the push was hidden by a KU body from the halfcourt camera

Embiid took some real satisfaction in that follow dunk... He's been beat up all day. Guessing he's going to love this one for a long time...

David Leathers in reply to Maxbball11

Bilas is, in my opinion, the best College basketball analyst.

there is SC top ten number 2

BIG FINISH FOR THE BIG MAN!!!!

Maxbball11 in reply to Jim Dickerson

He shoved with two hands but it was nothing compared to what they had let go just seconds before that.

I wish to hell that Bilas would STFU about the refs.

Didn't look like it to me, but I suppose it's pointless either way.

That didn't look like a foul on Smith either.

Wildly uneven calls. Tick tack and nothing on hard ones.

Bwag in reply to Eddie Saldanha

Haven't seen him come back out of the locker room yet...

And the makeup call.

It rolled of Beed's leg

Largest lead of the game for Kansas...

I thought I heard the TV say he just came back to the bench?

hey Matt can we get an update on how PE is doing?

No, but Black leading scorer

wish Lucas and Greene would get more minutes.

I can't believe I really predicted a loss today.. Shame on me.

Is the bench outscoring the starters today?

Guess the good news (regarding Perry) is that KU doesn't play again until the 30th.

Maxbball11 in reply to Matt Lacey

Grrrr...I hope he is not concussed!

If Ellis has concussion he will miss valuable practice time and possibly a game or two. Huge blow. I hope he is all right

Funny how Self was asked just yesterday if there was still a role for Tarik Black. His answer? "Absolutely." Guess he was right.

Matt Lacey in reply to Ashwingrao

Got an elbow to the head (looked to me incidental, others would say not). The subsequent foul shot missed the rim to the left by a foot. Clearly woozy

Ashwingrao in reply to Matt Tait

I just came in. What happened to Ellis?

Hope like heck he's ok. Hate to see him take a shot like that. Good kid deserves better than that kind of play from an opponent.

I like Black coming in and it seemed like he was trying to hold everyone in place and quiet it down. Until their big came in trying to show how big a man he was to Black. Wouldn't condone it, but I bet Black could take him, haha...

Just a quick update: No word or report on Perry Ellis yet... Haven't seen him back on the bench.

Crimsonphoenix in reply to Matt Lacey

Stupidmichael in reply to Matt Tait

yes. And from forcing things.

Think he might be protecting him from taking a cheap shot down the stretch.

Maxbball11 in reply to Matt Lacey

Probably because Georgetown is baiting a fight were up no need to risk it.

Wiggins was heating up and Self subs him? How'd he not notice that?

Need to set up Wiggins for an oop or a breakaway steal.

David Leathers in reply to Lawkan

Yet, what EJ did in the Michigan game was wrong? This is Kansas, we don't do that.

No reach-in?? Glad he made the shot though!

Allen Fieldhouse is rocking and the Jayhawks are rolling right now...

It's their fault not calling the ridiculous amount of contact! Failing at their job so completely is sad.

Wiggins is ready to take over... He's bouncing, chirping a little and he looks like he wants to go for the kill.

need to put Wesley in and have him knock somebody out.

Gonna end up with a fight during thsi game, refs fault, not controlling georgetown's emotions..

Looked like Wiggins was throwing it to the ref

Was that another hit to the head?

So, how bout that Duck Dynasty guy, eh?

There's a difference between physical and intentional. Some of these plays look more intentional. Just my opinion.

Black and Smith having a conversation on the floor right now. Looks friendly. Keep an eye on that match-up, though.

Georgetown bench looks a little shell-shocked right now. Not too long ago they were in this game and dictating it.

So much conspiracy theorizing. It's called physical basketball.