Lexington, Ky. — With the amount of hours dedicated to the hype and buildup for Saturday’s blue-blood battle soaring into the triple digits, Saturday’s 71-63 victory by No. 8 Kentucky over 9th-ranked Kansas certainly delivered the type of atmosphere one might expect of the two winningest programs in college basketball history. By Matt Tait

Bill Self on UK’s bigs, KU’s loss and more 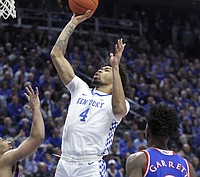 The battle of blue blood programs lived up to the billing. No. 9 Kansas and No. 8 Kentucky traded punches during a gritty, slugfest in the SEC/Big 12 Challenge Saturday afternoon. In the end, though, the Wildcats delivered the decisive blows in the second half to secure a 71-63 victory over the Jayhawks in Rupp Arena.