Quick Recap: Mountaineers knock off No. 7 KU in final seconds

Trips to WVU Coliseum never seem to go too smoothly for the Kansas basketball team, and the Jayhawks’ experience against West Virginia on Saturday afternoon was no different. Jermaine Haley’s layup in the final seconds proved to be the game-winner for the victory-starved Mountaineers, who picked up their first Big 12 win, 65-64.

Morgantown strikes again. Despite controlling the second half and leading for more than 26 minutes of Saturday’s game at West Virginia — including nearly all of the second half — the No. 7-ranked Kansas men’s basketball team said hello to an old nemesis as the final horn sounded at WVU Coliseum. By Matt Tait 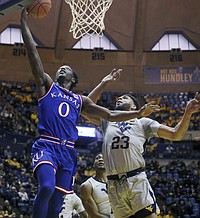 Morgantown, W.Va. — The senior guard should have known better. Playing in his 112th game at the University of Kansas and making his 57th career start, Lagerald Vick, by osmosis alone, should have picked up somewhere along the line a mental note about what to do when his team is down a point with the game on the line.

Morgantown, W.Va. — Five days earlier, in a home win over Texas, it was Marcus Garrett’s jump shot that led to a career night and 20-point outburst for the Kansas sophomore. On Saturday, in KU’s 65-64, gut-wrenching loss at West Virginia, Garrett’s offensive encore was one of the few bright spots in a day gone horribly wrong for the 7th-ranked Jayhawks at WVU Coliseum.

Game blog: No. 7 Kansas at WVU