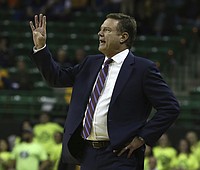 Waco, Texas — There were some issues at the end of Saturday’s 73-68 victory by No. 7 Kansas over Baylor at the Ferrell Center that certainly will be talked about, but might never be watched. None of them will change the way KU coach Bill Self felt about his latest road victory in the Big 12.

Lawson and Vick weigh in on KU’s win at Baylor

Waco, Texas — Kansas senior Lagerald Vick has had a bunch of memorable moments in a KU uniform, but none quite like this. Late in the first half of Saturday’s 73-68 victory at Baylor, Vick drained a 3-pointer from the wing, just left of the top of the key, that put Kansas ahead 27-22 and launched Vick into some exclusive company.