Saturday served as a nice reminder that the Big 12 conference still runs through Lawrence. Despite all the recent distractions, Kansas ended a two-game skid by trouncing one of its biggest threats to the throne. No. 11 KU led the for the duration of its 79-63 victory over No. 16 Texas Tech Saturday afternoon in Allen Fieldhouse. 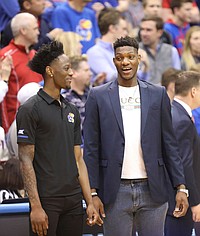 View a gallery of photographs from Saturday's game between the Jayhawks and Red Raiders at ...

Despite distractions, KU players "came together" in victory over TTU

The questions lingered, doubt ran rampant and genuine concern to the point of full-fledged worrying was starting to cast its shadow on the entire Kansas basketball world. And then, the Jayhawks returned to the building they call home and calmed everyone’s biggest fears.

It’s no coincidence that one of the Kansas basketball team’s most impressive victories of the season came on the heels of the Jayhawks learning the on-court fate of one of the program’s most popular players. Throughout the first three months of the schedule, there always remained a chance. Maybe KU could add 6-foot-9 forward Silvio De Sousa to its lineup, and take off to another level as a result.