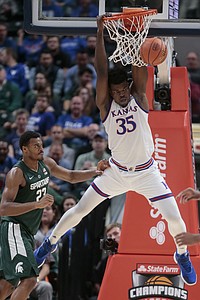 In their first game of the regular season, the Kansas Jayhawks faced off against the ...

In the first official action of the new season, No. 1 Kansas demonstrated its talent on the national stage. Behind contributions from several new players, KU was nearly always in control during its 92-87 win over No. 10 Michigan State Tuesday night during the Champions Classic. It marked the third consecutive season that the Jayhawks have won their matchup in the Champions Classic, which was moved up a weak earlier this season.

Rookie backcourt propels No. 1 KU past No. 10 Michigan State

Indianapolis – Kansas freshman Devon Dotson had a simple way of explaining how he and fellow freshman Quentin Grimes exploded onto the college basketball scene during Tuesday’s 92-87 victory by top-ranked Kansas over No. 10 Michigan State at the Champions Classic in Bankers Life Fieldhouse.

The 2018-19 college basketball season is finally here. Even better — No. 1 Kansas doesn't open the schedule with a nonconference Who's That University type of opponent. The Jayhawks clash with No. 10 Michigan State in Indianapolis, at the Champions Classic.