KU coach Bill Self says winning ugly can be pretty

No. 2 Kansas outlasts No. 5 Tennessee to stay undefeated

Kansas freshman Devon Dotson may not quite be worthy of mention in the same breath as former KU stars Frank Mason III and Devonte’ Graham just yet. But he’s gaining on it. And he played a huge role in KU's hard-fought, 87-81 overtime win over No. 5 Tennessee on Friday in Brooklyn, N.Y. By Matt Tait 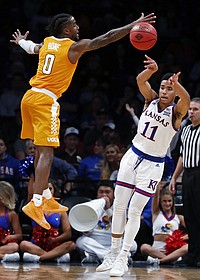 The No. 2-ranked Kansas basketball team faces No. 5 Tennessee in the finals of the NIT Season Tip-Off, in Brooklyn.