The result of Eastern Michigan’s first possession showed it, and, after the game, EMU senior James Thompson IV confirmed it. KU’s plan to double-team the post during Saturday’s 87-63 Kansas victory at Allen Fieldhouse completely caught the Eagles off guard.

KU coach Bill Self on win over Eastern Michigan

Quick recap: No. 5 Kansas closes out 2018 with convincing win over EMU

The Jayhawks could not have asked for a better way to close out 2018. No. 5 Kansas (11-1) responded from its first loss of the season by dominating Eastern Michigan from the jump during an 87-63 victory Saturday afternoon in Allen Fieldhouse. KU, which led for over 37 minutes of its last game before the start of Big 12 play, never trailed by more than three points.

For the first time in 25 days, Kansas junior Udoka Azubuike was back in the starting lineup for the Jayhawks on Saturday, taking his usual spot in the jump circle to start KU’s final tuneup for Big 12 Conference play. Although Azubuike’s presence in the starting lineup came as a surprise to the sold-out Allen Fieldhouse crowd, what followed it was even more of a surprise to the Jayhawks themselves.

For more than a month, the superb passing skills of Dedric Lawson seemed to go dormant. Gone were the high assist totals that characterized the big forward’s first handful of games in a Kansas basketball uniform. Blame the circumstances for the dip more than anything else, and credit the return of center Udoka Azubuike for bringing Lawson’s distribution skills back to life. 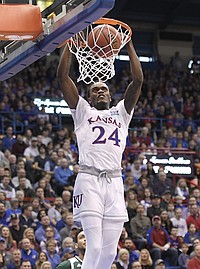 View a gallery of images from Saturday afternoon's game between the Jayhawks and Eagles at ...