Kansas basketball coach Bill Self moments after Thursday's 75-54 victory over Stanford at Golden 1 Center said there was no change in the status of Class of 2018 big man Silvio De Sousa on Thursday. However, Self did provide a couple of snippets of new information in the 6-foot-9, 245-pound power forward's quest to join the Jayhawks in time for the upcoming second semester. By Matt Tait

When the 14th-ranked Kansas Jayhawks left California late Thursday night following their final game before the start of Big 12 play against Stanford, they did so knowing two things about their immediate future. First, with Christmas just three days away and school and basketball grinding to a momentary halt, they get the next few days to kick back, relax and celebrate the holiday season with friends and family. Second, their down time will not last long. By Matt Tait 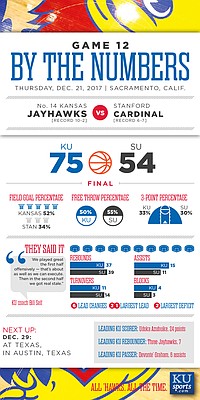 View a gallery of images from Thursday night's game between the Jayhawks and Cardinal in ...

Game blog: No. 14 Kansas vs. Stanford

The Kansas basketball team’s final game before Big 12 play fires up comes in Sacramento, Calif., versus Stanford. The No. 14 Jayhawks (9-2) look to beat a Pac-12 team for the first time this month, having already lost to both Washington and Arizona State. Former KU guard Jerod Haase, now in his second season as head coach of the Cardinal (6-6), brings a wounded backcourt into the matchup, but still has junior big Reid Travis (22.2 points per game) to throw at Bill Self’s Jayhawks.