Kansas senior forward Perry Ellis banged knees with a UConn player during the Jayhawks’ 73-61 second-round victory Saturday at Wells Fargo Center, and left the floor limping early in the contest. KU fans were relieved when Ellis was back after a minute or so on the sidelines. By Gary Bedore

Kansas University basketball coach Bill Self’s search for quality post play alongside Perry Ellis kept coming up empty early in the season. It ended long ago and was stuffed deeper into the past Saturday night at a block party at the expense of Connecticut. By Tom Keegan

After watching his team trim a 23-point Kansas lead down to nine on two different occasions late in the first half of Saturday’s second-round NCAA Tournament game at Wells Fargo Arena, UConn freshman Jalen Adams said he could feel the momentum turning the Huskies’ way. But both times a familiar face and fellow Roxbury, Mass., native made plays that pushed the Kansas lead back to double digits and kept UConn from completing the comeback. By Matt Tait 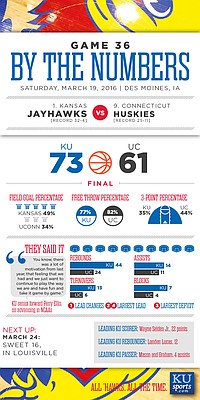