KU junior walk-on Evan Manning hit a three-pointer in the closing moments with his mom and dad in the stands. Dad Danny Manning is first year coach at Wake Forest.

It's down to Frank Mason III, a sophomore, and freshman Devonte Graham. They both seem more concerned with how they play than how they are used, which always is a good thing for a basketball team’s chemistry. By Tom Keegan

If taken literally, Emporia State coach Shaun Vandiver's word for the Kansas University men's basketball team's front court sounds more like an affectionate nickname from a young child to one of his grandparents. By Matt Tait

One thing was obvious after eight Kansas University basketball players scored in double figures — and 11 played 12 or more minutes — in the Jayhawks’ 109-56 rout of Emporia State on Tuesday night in Allen Fieldhouse. By Gary Bedore

View a gallery of images from Tuesday night's exhibition between the Jayhawks and Hornets at ...

It was a slow and sluggish first half with a lot of free throw shooting, but it quickly turned into what you'd expect from an exhibition finale at Allen Fieldhouse.

The Kansas Jayhawks raced past visiting Emporia State, 109-56, to close out the exhibition portion of their schedule.

KU shot 68 percent in the second half.

These types of games don't always give a great indication of where the superior team is, but KU showed pretty sharp intensity and effort — especially on defense — from the opening tip and smothered ESU with size, speed and athleticism.

• The game turned when: Cliff Alexander's monster dunk, Devonte' Graham's steal lay-in and a free-throw-line bank shot from Alexander pushed the KU lead to 42-20 with 2:02 to play in the first half. The Jayhawks led by 21 at the break and never looked back, outscoring ESU 63-31 in the second half to cruise to the easy tune-up victory.

• Offensive highlight: It was subtle, but it showed two things about the transformation Jamari Traylor has made and continues to make as a player. With 6:43 to play in the first half, Traylor tracked down a loose ball on the offense end (go figure) and immediately attacked the rim. As he went up on the left side, he flashed great body control, took the foul and calmly ducked under the rim and laid the ball off the glass and in and picked up the three-point play after draining the free throw following the media timeout.

• Defensive highlight: Moments after a sweet lob from Wayne Selden to Perry Ellis energized the Allen Fieldhouse crowd, Jamari Traylor kept things elevated by rising up to swat a shot attempt from ESU's Tyler Jordan. The exchange pushed KU's lead to 57-28 and further showed that, despite completely overmatching the Hornets, KU still brought plenty of intensity to the building.

• Key stat: Gotta be the free throws. After hitting just 50 percent last week and feeling Bill Self's wrath because of it, the Jayhawks drained 25 of 32 charity shots on Tuesday night, good for 78 percent.

• Up next: The Jayhawks officially will open the 2014-15 season Friday night at 7 p.m. against UC-Santa Barbara at Allen Fieldhouse. 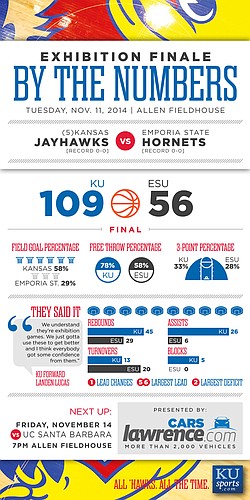