Notebook: Perry Ellis scores most points in a KU debut since Josh Selby

Kansas University freshman forward Perry Ellis scored 15 points in the Jayhawks’ 74-55 victory over SE Missouri State on Friday night in Allen Fieldhouse. It marked the most points scored in a debut by a Jayhawk newcomer since Josh Selby’s 21 points versus USC on Dec. 18, 2010. 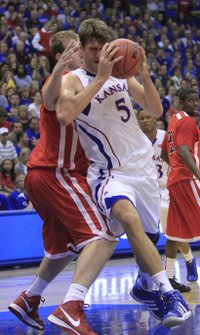 KU's defense was especially stifling in the first half, as SEMO made just 6 of 29 shots (21 percent) as the Jayhawks took a 32-17 halftime advantage.

The Jayhawks won despite making just 2 of 21 three-pointers (9.5 percent).

"I thought we did some good things considering they only shot 29 percent and we out-rebounded them (49-37)," KU coach Bill Self said. "We only turned it over 13 times and we go 24-of-28 from the free-throw line. That (typically) is going to be a 40-point game.

Ben McLemore had a balanced line, posting in nine points, 12 rebounds, five assists and three blocks to go with a turnover.

"It blows my mind that we are not an aggressive group," Self said. "We are a passive group right now, and we have to pick it up. I'll keep saying it, and I'm not going to back off of it."

KU (1-0) will play Michigan State at 6 p.m. Tuesday at the Champions Classic in Atlanta.