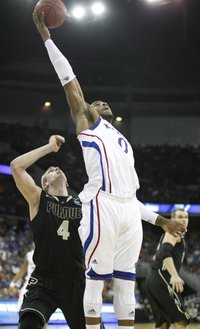 For Kansas University basketball fans who believe in omens, Sunday’s 63-60 third-round NCAA Tournament victory against 10th-seeded Purdue had to be a sweet sign. In each of the last three years, the team that has knocked out the Boilermakers in the NCAA Tournament has advanced to the Final Four.

Upstart Wolfpack next up for KU

No. 2-seeded Kansas University will meet No. 11 seed North Carolina State on Friday in the Sweet 16 in St. Louis. Game time is 9:17 p.m. at Edward Jones Dome.

Kansas coach Bill Self talks to reporters following the Jayhawks' 63-60 victory over Purdue on March 18, 2012.

In the final 3:12 of KU’s 63-60 victory against Purdue, which advanced the Jayhawks to a Sweet 16 match-up against North Carolina State, Johnson sensed somebody had to make things happen, and he didn’t see any reason not to be that somebody.

Elijah Johnson put in a breakaway dunk with 23 seconds to give KU the lead, and Purdue's Robbie Hummel and Ryne Smith missed late threes for the lead and tie as the Kansas men's basketball team defeated Purdue, 63-60, on Sunday night in the Round of 32 at CenturyLink Center in Omaha, Neb.

KU trailed by as many as 10 points early in the second half.

KU advances to the Sweet 16, where it will face 11th-seeded North Carolina State on Friday.