Recap: No defense, no problem for KU

The Colorado students were a bit more frenzied than usual during the Buffs’ 82-78 basketball loss to Kansas University on Tuesday night.

There he was sitting on the bench and watching again Tuesday night toward the end of the game, just as he was the first nine games of the season because the NCAA had suspended him. 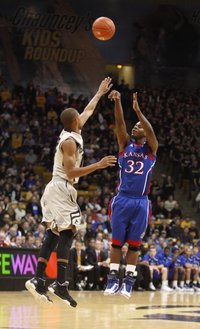