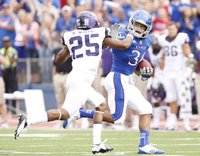 Images from Saturday's game against TCU.

Candidates for Game Balls and Gassers ...

It's hard to call a team's leading rusher its secret weapon, but in a way, that's exactly what KU sophomore Tony Pierson was during Saturday's 20-6 loss to TCU.

When quarterback Dayne Crist fumbled into the end zone from the three-yard line on Kansas University's final offensive play of Saturday's 20-6 loss to TCU, the turnover put an end to KU's chances and the game was all but over.

The Kansas defense forced four turnovers, but it wasn't enough as TCU's defense shut down KU in a 20-6 victory over the Jayhawks on Saturday at Memorial Stadium.

The Jayhawks offense finished with 380 total yards but scored just six points in three trips to the red zone.

TCU quarterback Casey Pachall finished 24-for-30 passing for 335 yards and two scores. TCU scored on just three of its seven trips to the red zone.

KU quarterback Dayne Crist was 19-for-39 for 303 yards with no touchdowns and an interception.

Bradley McDougald had 12 tackles, including two for loss and one sack to go with two forced fumbles.