Another sorry trip to Austin

For the second time in three years, a Kansas University football coach sitting on the hottest seat in college football came into Darrell K. Royal Texas Memorial Stadium with his reeling team.

Without asking anyone, Texas linebacker Emmanuel Acho ran back onto the field. Immediately, linebacker Keenan Robinson followed him. 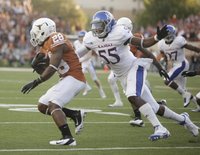 Maybe the Kansas football team's offense isn't as improved as coach Turner Gill says it is. The Jayhawks set one more record for futility on Saturday night, mustering just 46 yards and three first downs in a 43-0 loss to Texas at Darrell K Royal-Texas Memorial Stadium in Austin.

The fewest known first downs for KU in a game before Saturday was four against Nebraska in 1972. Those records go back to 1968.

The lowest known total for yardage in a game for KU is 44 yards against Nebraska in 1997.

In the first half, KU ran 13 plays for 10 yards (Texas had 316 first-half yards). The Jayhawks had seven rushes for six yards and two completions for four yards.

Through three quarters, KU had just nine yards on 25 plays. That included 16 rushes for negative-three yards.