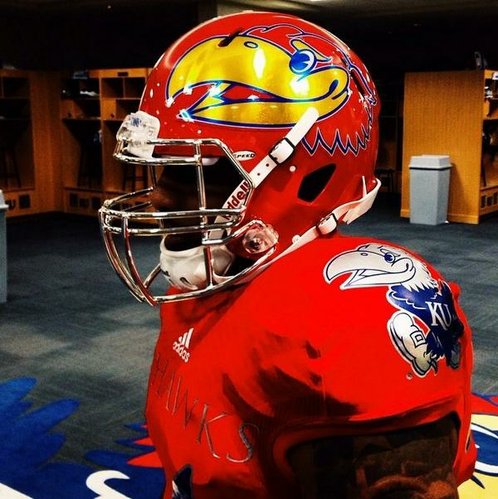 The Kansas University football program late Tuesday night released yet another new-look uniform which will be worn during the upcoming season.

The uniform, dubbed Crimson Chrome features red pants, red jerseys, a red helmet (complete with a chrome face mask) with a huge Jayhawk head on the top and side and chrome numbers, letters and Jayhawks dotting the look.

The new uniform comes on the heels of last year's uniform explosion which allowed the Jayhawks to mix and match tops, pants and helmets for triple-digit uniform options.

This video, which shows the new red uniforms, uses the demo model. A KU spokesperson said the names would be on the backs of the Crimson Chrome uniforms when they're worn this fall.

As you can see, the players seem to like them a lot and have not missed any of the little details that make them unique.

Red uniforms have been popular with the KU fan base for a number of years, dating back to the success the Jayhawks had while wearing them in their Orange Bowl victory over Virginia Tech in 2007. 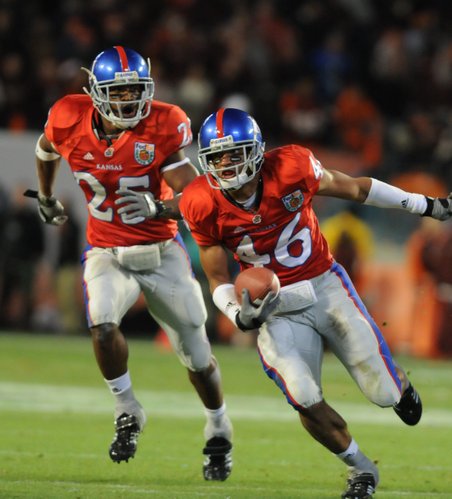 While the newest uniforms most certainly are red, they're more of a modern spin on the old classic, which begs the question.... What do the fans think?

Like 'em or hate 'em, love 'em or loathe 'em, score another one for KU's creativity. There are plenty of players and plenty of programs out there that would do just about anything to have this kind of flare to their gameday gear and so many options at that. 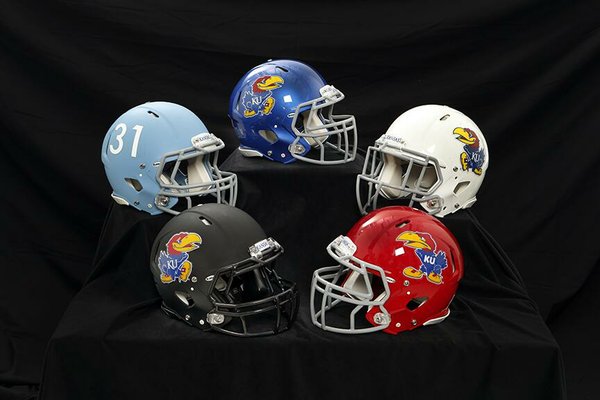 The Kansas University football program on Monday unveiled five new looks for the team's helmets, four of which now feature the Jayhawk on the sides. (Photo courtesy of KU Athletics) by Matt Tait

It's hard to say whether it was a calculated move or an innocent delay, but when news hit that the Kansas University football program would unveil some type of "new gear" around noon today, speculation from Jayhawk fans scored off the charts.

Unfortunately, so did the waiting.

Instead of releasing the new look, which is highlighted by the presence of a variety of Jayhawks on different colored helmets, around noon, it did not actually come out until just before 4 p.m.

Here's a quick look at that video, which clearly shows that the Jayhawks now have five potential uniform styles. All of the uniforms used in the video were from last season's closet, but a KU official said the school planned to update the uniforms before the 2013 season begins.

Here's a look at the styles on display Monday:

• The black ones they wore last year vs. Iowa State