The Kansas men’s basketball roster for the 2021-22 season officially grew by three players on Wednesday, when KU announced the additions of transfers Cam Martin, Sydney Curry and Joseph Yesufu.

All three will be eligible immediately and figure to make an instant impact in the KU lineup.

Martin and Yesufu come to Kansas by way of four-year transfer from Division II Missouri Southern State and Drake.

Both are prolific scorers with good athleticism who should help KU’s outside shooting as much as anything.

A juco transfer from Logan Community College, southeast of St. Louis, Curry is a true big man who likes to do his damage as close to the basket as possible but also moves well for a player his size.

The way things go in recruiting and with various commitments, you sometimes see three or four different heights, weights and rankings for the same player, depending, of course, on where you’re looking.

But now that the Jayhawks have officially added this group to the 2021-22 roster — joining November signees and four-star prep standouts K.J. Adams and Zach Clemence — we have a clear understanding of how KU measures them.

Noteworthy: Will be playing in the NJCAA National Tournament, April 19-24, in Hutchinson.

Bill Self on Curry: “Sydney is going to bring size, strength and athleticism to our frontcourt, giving us another rim protector. He’s a big man that can play above the rim and has shown the ability to have a big presence inside. Sydney has been developed very well while at Logan and is making a big impact as they continue to play in the upcoming JUCO national tournament.”

None by Sydney Curry

Statworthy: Averaged 25.0 points and 9.0 rebounds per game at Missouri Southern where he was coached by former Kan-sas standout guard Jeff Boschee. His senior season he made 58% from the field and 45% from 3-point range on 110 attempts.

Noteworthy: Was a Division II All-American who was coached by former Jayhawk great Jeff Boschee

Bill Self on Martin: “Cam is going to bring a lot of versatility to our frontcourt, allowing us to play with space and size. “Jeff Boschee runs a solid program at Missouri Southern and knows exactly what it takes to play at this level. We’re very excited that Cam is coming to Kansas and look forward to the positive impact he will have on this team.”

None by Cam Martin

Noteworthy: Yesufu’s surname is Nigerian and although he had not yet met KU’s Udoka Azubuike or Ochai Agbaji at the time of his commitment, he said he was aware of their Nigerian roots.

Bill Self on Yesufu: “Joseph is an explosive, dynamic scoring guard that will allow us to play an up-tempo, aggressive style on both ends of the floor. He ended last season playing at a high level, including winning an NCAA tournament game and propelling Drake to a great season.” 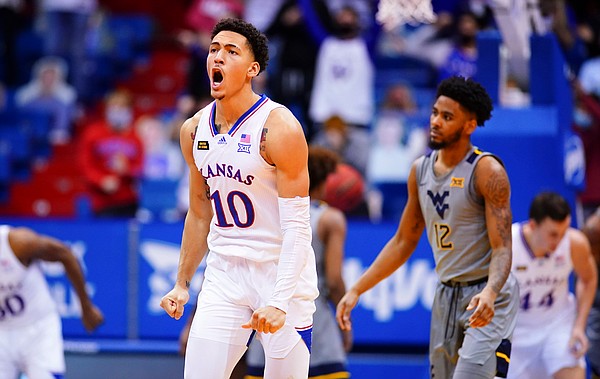 Kansas forward Jalen Wilson (10) roars after hitting a three pointer against West Virginia during the second half, Tuesday, Dec. 22, 2020 at Allen Fieldhouse. by Nick Krug

Now that college basketball has a new champion for the first time in two years, it’s on to the next season everywhere but Waco, Texas, where the Baylor Bears will continue their celebration of the 2020-21 season for decades to come.

As well they should. Scott Drew's team had an incredible season — for the second year in a row — and capped it off with two dominant performances at the Final Four in Indianapolis.

While the transition to another offseason of college hoops means looking closer at which players are returning, who’s leaving and, in the modern day, who might be transferring, it also means taking a first glance at how things might stack up entering next season.

The Kansas men’s basketball team figures to return most of its core for the 2021-22 season, and Bill Self and company have been adding pieces via transfer or late prep commitments in the past week or so, as well.

All of that, along with the likelihood of more to come, has the Jayhawks positioned to be a Top 10 team entering next season according to most of the national media.

Here’s a quick look at what several national outlets are saying about the Jayhawks in their traditional “way too early” Top 25 polls for next season.

Skinny: “One of the best teams in the country over the final month of the season, Kansas should celebrate Bill Self's lifetime contract with a much more consistent group. The Jayhawks are likely to lose senior Marcus Garrett, but most of the rotation should return. Jalen Wilson and David McCormack both had long stretches where they looked like stars, while Christian Braun and Ochai Agbaji are stalwart starters. The big question could be at point guard without Garrett. But DaJuan Harris showed flashes of his two-way ability this past season, while former Louisville signee Bobby Pettiford was a top-100 prospect at the high school level. Self also has Bryce Thompson, who came into school with the reputation as a big-time scorer but struggled with injuries as a freshman. Kansas' frontcourt should be loaded, though, with top-50 prospects Zach Clemence and K.J. Adams entering the fold.”

Skinny: “The Jayhawks should return the majority of last year’s team and will add a few key pieces. Bill Self has a lifetime contract now, but he’ll need for the freshman Pettiford to be ready, as he’ll be expected to make plays off the bounce. KU has a strong frontline of McCormack and Wilson, and quality perimeter players in Agbaji, Braun and Thompson. But the key comes at the point guard spot, where it could be up to Pettiford to change the dynamic of this team.”

Skinny: “Even if Ochai Agbaji moves on, Kansas should still return four starters from a team that went 9-2 in its final 11 games and advanced in the NCAA Tournament. A top-10 recruiting class will help the Jayhawks compete for the Big 12 title.”

Who: The Athletic’s Seth Davis

Skinny: “The upside of having a down year (by the Jayhawks’ standards, anyway) is that the team won’t lose a bunch of players to the NBA Draft. Agbaji could test the waters but is not a projected first-round pick. Bill Self didn’t land any McDonald’s All-Americans, but his recent addition of Pettiford strengthened the freshman class, and Curry is a juco transfer who should have a chance to play significant minutes. Martin is an intriguing grad transfer who averaged 25 points and 9.1 rebounds at Division II Missouri Southern State.”

Skinny: “Jalen Wilson could be a star and the Jayhawks will be ready to challenge the Bears again for the title.” We’re assuming Katz is talking the Big 12 title there, but who knows?

Skinny: “Coach Bill Self's lifetime contract means continuity in the pilot's chair. What KU's roster looks like in 2021-22 will be less predictable. There's a chance the Jayhawks lose Ochai Agbaji to the NBA, along with departing senior Marcus Garrett, but David McCormack (13.4 ppg, 6.1 rpg) and Jalen Wilson (11.8 ppg, 7.9 rpg) are set to return. Self will be busy on the recruiting trail, where he's yet to land a five-star.”

Skinny: “Bill Self was open about needing to add more talent this spring after a blowout NCAA tournament loss to USC, and the Jayhawks are set to do just that. In addition to strong returners like Jalen Wilson and David McCormack, Self has already signed three four-star recruits, a top-10 juco recruit and top D-II transfer Cam Martin. Sophomore point guard DaJuan Harris has a critical offseason ahead of him to develop as the top playmaker for the Jayhawks, and Self may have a bit of a logjam on his hands with several different options up front. One big draft decision to track: Ochai Agbaji, the team’s leading scorer this season and a projected second-round pick.”

Skinny: “The Jayhawks had one of the nation’s best defenses in the latter part of the season and should bring back four starters: David McCormack, Jalen Wilson, Ochai Agbaji and Christian Braun, with Agbaji potentially testing the waters. But it’s what Bill Self has done around those guys that could elevate the Jayhawks. He’s added two big-man shooters in freshman Zach Clemence and transfer Cam Martin, another powerful interior player in juco transfer Sydney Curry and a hard-nosed 4 in freshman KJ Adams. Former five-star Bryce Thompson could be due for a second-year leap, while DaJuan Harris will battle four-star freshman Bobby Pettiford and potentially (Ty Ty) Washington — the No. 3 point guard in the 247Sports Composite — for the point guard spot. The Jayhawks could also lead for athletic Creighton big-man transfer Christian Bishop, and 247Sports’ Brandon Jenkins reported that Kansas has the most momentum for South Dakota’s Stanley Umude.”