Kansas coach Lance Leipold not apologizing for close-call win over South Dakota; just the opposite, in fact 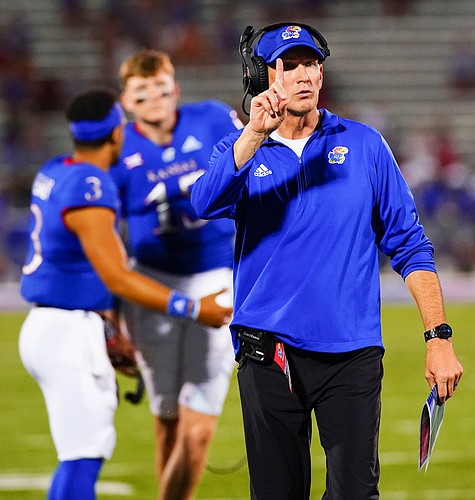 Kansas head coach Lance Leipold signals to an official during the second quarter on Friday, Sept. 3, 2021 at Memorial Stadium. (Photo by Nick Krug/Special to the Journal-World) by Nick Krug

Before diving into Kansas football coach Lance Leipold’s breakdown of KU’s Week 1 victory after watching it on film, let’s start with the most important thing Leipold said during Monday’s press conference.

“There’s not a position on our team that we can’t get better at,” he said.

If that does not give you a clear look at exactly how KU’s new coach hopes to build this thing, you might never get it.

There were plenty of players and even position groups that performed well during last Friday’s season-opening victory over South Dakota. But those performances are now yesterday’s news.

His players themselves and the rest of the coaching staff are seeking that, as well.

If KU gets to the point where enough guys are doing that enough of the time, then there may be reason for optimism in Lawrence.

Until then, the Jayhawks are still just one track into recording something they hope will sound more like a Top 40 hit and less like the kind of death metal that comes pouring out of an angry teenager's bedroom.

No one is going to brag about KU’s three-point win over an FCS program. More, bigger and better was the goal.

But when you consider that wins have been so tough to come by at KU in the past decade, the fact that Leipold and his program have openly embraced that 17-14 victory as a good first step is also a sign of how they plan to build this thing.

In Week 1, the mere fact that Kansas found a way to win after going down 14-10 with 5 minutes to play is good enough for a mark in Column A.

“The thing that I was most proud of is the things that I maybe saw on film last year when things didn’t go right, and how we responded and overcame that,” Leipold said Monday. “And yeah, you can say. ‘It’s an FCS team’ or whatever. All those other things that I’m not going to worry about right now.

“The fact is, this team came from behind when it had to, and it had a fourth and 10 and other things, and we found a way to win a football game.”

Fans and foes alike speculated after the game that many Kansas teams in that same scenario in recent years would have found a way to not get it done.

Leipold was asked Monday if he saw anything specific on that last offensive drive that illustrated why this team came through in that situation last Friday night.

While acknowledging that he wasn’t in the huddle, the first-year KU coach pointed to a few things he believed were factors.

“Hypotheticals are always tough, to say whether or not it would have happened in another year,” Leipold said. “I'm just awful glad it happened Friday.”

The Jayhawks are going to have to improve a lot — remember that opening quote? — before anyone is going to predict them to be competitive the rest of the way. After all, Vegas listed Coastal Carolina as a 27-point favorite when the line for this Friday’s game first came out.

But Leipold and company are hoping that a little confidence from their early success combined with the new mentality of several fresh faces may expedite things a bit.

“There is enough newness in some of the personnel that hopefully can help change things as we go through this season,” Leipold said.

This week, KU travels to No. 17 Coastal Carolina on Friday for a 6:30 p.m. kickoff that represents one heck of a test and an even better opportunity.

They have a great opportunity this Friday. I felt they were holding some stuff back in last Friday's game. A little gamesmanship for the next game. I might be wrong, but at least that was my thoughts. My prediction for the CCU game is CCU 34 - KU 24.

I'm not sure holding something back is how I would articulate last week. I would say that historically our team does about 3-4 3 and outs to start a game and we are down 14 or 17 points and the defense never has a chance. However, our defense really was the key this week. The 3 and outs happened, but the defense didn't let up, in fact they shut them out the first half.

The offense started to get going at the end of the second half and although still was not optimal it started to move the ball. I think that the O-line or our RB have to get some speed. We can't have our RB have 19 carries and 21 yards, it just isn't sustainable. I'm hoping Neal has something that is available in the future.

They say between week 1 and week 2 you see the greatest adjustments, it'll be hard to judge since we are now going on the road against a top 25 team and one that runs the ball efficiently. Some stacked problems there, but I'm intrigued by the game.

Not related to the story, but why is the latest basketball roster posted on the website dating back to the 2017 - 2018 season?

Can you point me to the page? Thanks!

Matt...at top of home page, click on "Basketball" tab. Then you can scroll to bottom of page and under "basketball" is roster. Also, on "Basketball", click on "recruiting" then there is a subheader titled "roster" and it again pulls up the 2017 - 18 roster. Hope this helps.

Got one of the issues fixed. Working on the other. The stuff at the bottom may require me reaching out to our CMS provider and having them fix it or tweak it on their end. Thanks for bringing it to my attention, though. Always appreciated... Have a great week!

Matt, while we are at it, the "Active Discussions" area on the front page is way out of date and kind of embarrassing since it raves about Jeff Long in a couple of places. See attached. 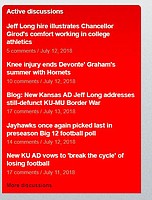 Richard in Matt's defense that was a heck of a team. :))

Matt the schedule is dated too - same place.

I'm not sure RB speed is an issue. I think we have plenty of speed at that position. What I saw Friday is not many lanes being opened and RBs not seeing a seam when it was there. Fix those issues and they are off and running. On the other hand, I thought the o-line did a much better job of giving the QB some time than they did last season. Since game planning is also required during the week there is not much time for fixing so many problems. It would have been nice to have that bye week this week. But it is what it is and over the course of the season we should start to see improvement, little by little, but significant improvement by end of the season. And then these coaches get a Spring as well as Fall camp next year...

I'm wondering if it is more of a hesitation issue...actually missing the small seams that aren't there very long. I think coach even touched on that when discussing the offense at all positions. I thing the zone reads that this staff wants to install, are going to require a lot of timing between the RBs and the O-line. The other thing I noticed was there was a lot of plays between the tackles, as opposed to the outside corners.

After reading more and watching more I think you're right that they are missing those seams. At the same time, against a team like USD I would think there should have been some more obvious openings available. If we can't get more than some very small seams against USD, how on earth can they find a way through against CC and B12 teams? Hopefully this gets fixed soon.

Dale - Absolutely right about improvements over the course of the season. While it was an FCS opponent, it also was an opponent with 21 returning players who not only had spring ball, but 4 competitive games. Seems like a generally overlooked preparation factor though Matt and Benton did discuss it in their podcast.

OC has talked about only getting to install parts of the playbook to begin with so there should be lots of room for improvement.

Staying within 4 scores Friday is a moral victory.

I finally was able to watch the Matt and Benson podcast (always enjoy those) last night but didn't have a chance to watch Kotelnicki and Borland although I enjoy those, too. I agree on the moral victory and hope we learn some things that will help in the future. Playing #17 that was 11-1 last year and who return almost all of their starters and play at their place, well, that's downright scary. I think we have the pieces to be competitive but don't think we're quite there yet for all the reasons we already are aware of. But I bet with this team and these coaches our guys fight to the final horn.

I admit I am massive critic of the Kansas Football program:

Maybe I didn't read close enough, who is asking for an apology? I get the meaning of the article, but it also implies criticism came with this win? KU never wins. Who was expecting a 35 point win?

Thank goodness for the win. It feels good on many levels. KU has restarted their program 76 times. They need to schedule 2 FCS teams until they go 6-6. It is the only way to slowly build this from the bottom.

So far from what I've seen of Leipold he's somewhat reserved and stoic. But he's pretty intense on the sidelines on game day! I like it!

He also never seems to blow smoke at us. If he doesn't know an answer, he says so. If he feels he cannot divulge something, he tells us that. In other words, he should never try to make a future in politics. He's too honest.

There are no delusions with the coaching staff. I like thier approach and have been a fan of coach L. since day one. The highs are muted, and this weekend if we lose, badly, the lows will not be too low either. I did not see the need to rush the field, but it has been a while since there was a reason.

Hope we give CC a good game, but if we don't, I think Coach will be honest, upfront and reasonable.

I look forward to a game against a top 25 team.

I have not had a reason to do that in a while with our Football Team. It's refreshing.

I don't know there was really a 'good' reason to rush the field but I was pleased to see it. I believe it meant a lot to the players and coaches. To me it said these fans like what they are seeing, they are hopeful for the future, and they want to support this team. If I were a player, seeing all those fans not only stick around after half time, or even just showing up in the first place, but seeing them rush the field after a comeback win, that would make me feel like all the hard work is worth the effort, that all I have done and am doing is appreciated by the fans. Just my opinion but that's how I would feel if I were young enough (and good enough, which I was not) to be on that team.