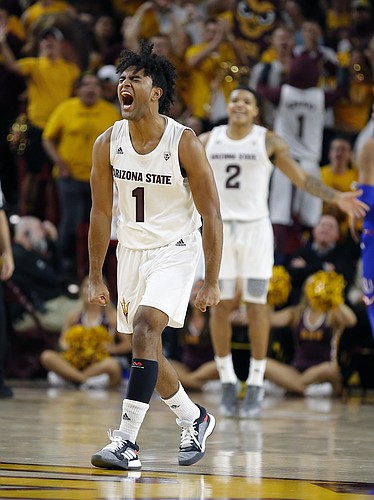 The Kansas men’s basketball team will officially kick off practices for the 2021-22 season on Wednesday and will follow that up with Late Night in the Phog on Friday.

For KU fans, the latter will be the first glimpse of Arizona State transfer Remy Martin in a Kansas uniform.

Martin is one of 10 new faces on this year’s roster, but because of his past production and high-profile image, he figures to be by far the most watched newcomer early in the season.

Martin comes to KU on the heels of back-to-back 19-points-per-game seasons with the Sun Devils. And it remains to be seen what kind of player he will be and role he will have with the Jayhawks this season.

But there’s little doubting that the KU coaching staff is expecting big things, and Kansas coach Bill Self has talked plenty about the impact he thinks Martin can make on the 2021-22 roster.

Here’s a look at some of what you can expect from the newest Kansas point guard.

He Will: Be every bit as good as advertised

There have been times in the past when freshmen or transfers have come into the program with a ton of buzz and failed to live up to the hype surrounding them.

This will not be one of those situations. Martin is a big-time player who has proven his talent at the highest level of college basketball, including in two games against Kansas in the past.

Because of that, the expectations of him making a huge and immediate impact are right on the money.

His skill set alone is enough to drive expectations through the roof. But the fact that he comes to KU as one of the most experienced players on the roster adds another dimension to that.

In fact, Martin’s 3,623 career minutes played at Arizona State (in 118 games) rank second on the team to fellow-newcomer Jalen Coleman-Lands, who’s had the benefit of five seasons and 15 extra games to get to 3,733 career minutes.

For context, Ochai Agbaji is the top returning Jayhawk with 2,611 career minutes, more than 1,000 behind Martin.

Martin has the game to make a major splash and because of the make-up of KU’s roster and his past experience, he’ll have the opportunity, as well.

He Won’t: Have the same freedom to shoot from wherever as he did at Arizona State

During his final two seasons at ASU, Martin averaged right around 15 shots per game and shot roughly 34% from 3-point range.

A lot of those numbers were out of necessity.

Even as a freshman, when he came off the bench for a team that won in Allen Fieldhouse, Martin was still looked to as one of the Sun Devils’ top scoring options.

His role only increased from there and, as a player with the ball in his hands more than anyone else, Martin had the freedom to run what he wanted, attack when he could and shoot whenever and wherever he felt like shooting.

That led to some big games and some serious highlights — not to mention deep 3-point makes. But the high usage also contributed to his shooting percentages and also put quite a burden on Martin’s shoulders.

At Kansas, none of that will be in play. In addition to having plenty of help around him, Martin likely will be asked to be a small — but important — part of a big machine that many believe can contend for a national title. He won’t have to do it all all the time. He’ll just have to do his job.

Some nights that might mean he scores. Other nights it might mean he attacks the paint relentlessly, either in hopes of getting to the rim or kicking out to wide open teammates. And other nights, he might be asked to get to the free throw line or, away from offense, lock up the other team’s primary ball handler.

What Martin will learn during his one year at Kansas — if he hasn’t already — is that there are ways for Bill Self players to impact the game without having it show up on the stat sheet.

Given that Martin has said repeatedly that his biggest goal this season is to win, that should mesh nicely with what KU asks and needs from him.

He Might: Average more assists per game than shot attempts

This kind of goes along with the last one, but we’re diving into it a little more.

Considering that Martin was not even invited to this summer’s NBA combine, it would make sense to conclude that pro scouts and GMs need to see something more than what he’s done thus far in his college career to take a longer look at him.

The answer to that is a big part of the reason he’s at Kansas and, if he plays it right, could go a long way toward helping him reach his goal of playing in the NBA.

At 6-foot, 175 pounds, Martin is on the short side for an NBA scoring guard. The length and height of guys who play that position could — not necessarily would but certainly could — negate any of the abilities he has flashed as a college player.

Shots are harder to get off. Turning the corner into the paint is tougher. And having big, burly, athletics dudes waiting for him when he gets there also is different than what he’s seen in college.

So where does he go from here? In my opinion, he has to show scouts that he’s a pure point guard.

With the supporting cast he has around him at Kansas, the opportunity to do that will be there. At any given time, KU should have at least two or three other gifted scorers on the floor with Martin, setting up the perfect scenario for him to run the ship and command an offense.

We already know he can shoot. He’s a 34% 3-point shooter for his career with nearly 200 makes in four seasons. So having that as part of his repertoire will not be an issue.

But the only way it will mean much is if he shows that he can run a team, making high-IQ plays, setting up teammates for easy buckets and defending the heck out of his opponent night in and night out.

All of those things will be requirements for Martin to play big minutes at Kansas. So the opportunity is there for him to do them well and showcase a side of his game that pro scouts haven’t seen a ton. That, one would think, would lead to Martin at least getting a look after the 2021-22 season.

For his career, Martin is averaging 11.7 field goal attempts and 3.9 assists per game. It’s impossible to think he could get his assist total above that number on a nightly basis.

But if the assists go up — say to 7 or 8 per game — the shot attempts likely would naturally come down, and Martin turning in lines where he shoots it 7 or 8 times per game — or less —and finishes with as many assists is certainly within the realm of possibilities.

Either way, it should be fun to watch it all play out.

If he can get 20 points per game while still dishing seven or so assists (Devonte’ Graham senior season-type numbers), I doubt anybody’s going to have much of an issue with that. It’s just hard to envision that based simply on the fact that there are so many options and weapons on this Kansas offense to begin with.

Dotson is a couple inches taller and some were even talking about him as a shorter PG.

Definitely agree on Remy improving his future with a strong PG season.

It is quite a rarity to total more assists than field goal attempts. Aaron Miles finished with the exact same amount (954 each) for his career, with 2 seasons of assists greater than FGAs. Jacque Vaughan did it one season. Only Mark Turgeon that I know of had more career assists than FGAs and he was usually a sub and definitely "pass first." None of these players worked in Bill Self's 'combo' guard system. I would expect MANY more FGAs from Remy.

well, we have come a long way from the early day of "fools gold" 3 point shooting. In today's game, it is a necessity and we were not that great at it last year, so I see Remy being a starter at some point.