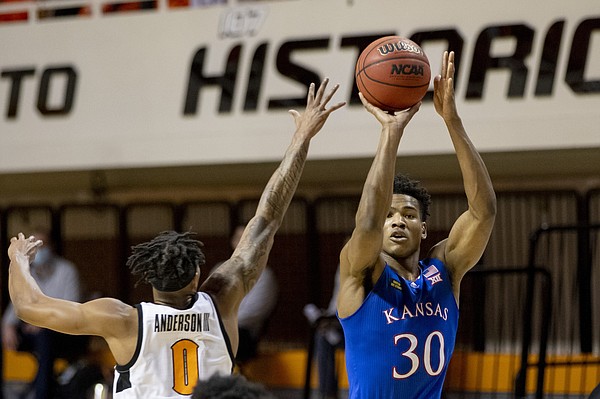 The official start of the 2021-22 college basketball season is right around the corner, with the Jayhawks starting practices next week and closing in on a month out from the season opener against Michigan State at the Champions Classic in New York City.

That means it's time to take a closer look at this roster, which, as you surely know by now, features 10 new faces and four returning starters.

We jumped into to our annual "He Will, He Won't, He Might" prediction series a few weeks ago with senior David McCormack but wanted to wait until we got closer to the season to keep it going.

We're there now, with Late Night just one week away and KU slated to host its first full-scale practice next Wednesday.

So here's a look at another senior to get things re-started: veteran guard Ochai Agbaji, who hails from Kansas City, Mo., and is slated to start for the fourth consecutive season.

He Will: Be this team’s unquestioned leader

Anyone who has been around Kansas basketball for the past four years knows that Ochai Agbaji is a born leader.

He showed signs of his take-charge ability during the second semester of his freshman season, just days after he had his redshirt removed. And while that ability to lead and step forward with his voice still needed the bite of production behind it, it did not take Agbaji long to get there.

By his sophomore season (2019-20), he emerged as a quiet leader, one who let the production of All-Americans Devon Dotson and Udoka Azubuike speak louder but also was not afraid to speak up and stay steady in his play.

And last season, as the face of the program, Agbaji led the team in scoring and was one guy who consistently seemed to be willing to try to take over games, even if the result didn’t always go as he had hoped.

Now, with three seasons of experience under his belt and the fire of coming back to KU for one more run, Agbaji will set the tone for this team.

He’ll have help, of course. And this team will have other leaders in other ways. But none of the returning players have as much invested in terms of on-court time and production as Agbaji. After getting rob of a run in 2019-20 and proving to be overmatched a season ago, Agbaji knows this team is loaded enough to make a real run and he will be in the right place every step of the way to make sure his teammates stay hungry and don’t slip.

On a team with 10 newcomers, that last part will be key.

He Won’t: Be so selfish that he tries to showcase his skills and improvement to the detriment of the team

It’s no secret that Agbaji was close to turning pro this offseason. But his production at the NBA combine — on the court more than during testing — and his desire to come back for one more run paved the way for him to return.

Now armed with firsthand knowledge of what NBA scouts are looking for, Agbaji has the tools required to have a monster season in 2021-22. But don’t think for a second that his biggest goals (playing in the NBA) will impact his immediate goals (going out with a bang and trying to win a national title at Kansas).

Agbaji is simply not wired that way. From the minute he first stepped on the floor as a once-redshirting freshman to the day he announced he was coming back for his senior season, Agbaji has shown that he’s a team-first guy all the way. He’s willing to play whatever role is necessary for the team to be successful. And while that role this season will no doubt include leadership and him asserting himself offensively at times, he won’t do either off script.

With Agbaji, it’s all about executing the game plan, doing what the coaches ask you to do and being both steady and reliable — for his coaches and teammates — every step of the way.

Agbaji’s 3-point percentage and 3-point makes have gone up during each of his first three seasons of college basketball, setting the stage for a monster senior season.

That’s the sign of a player who has become more comfortable in the offense and worked his butt off on his shot.

As a sophomore, he benefited from getting a ton of open looks thanks to the presence of Azubuike down low and the drive-and-kick ability of Dotson. Last season, he needed to be the team’s top shooter and scorer. This season, he’ll get to be whatever he wants to be, and that could drive opponents crazy.

With Remy Martin in the mix to run the point — and drawing comparisons to Dotson from Agbaji himself — Agbaji and several other Jayhawks should get plenty of wide open looks this season. If Agbaji gets them, 40% from 3-point range on 100 or so attempts should be within reach, no matter where he is on the floor.

For KU to be successful Agbaji needs to improve his ball-handling and defense.

I think the defense is fine. If you think about it, he's been on the floor at the end of games late in the season for the past three seasons. Two years ago, KU's defense was elite. Last year, after tweaking some things mid-season, the KU D started playing at a higher level. Agbaji isn't a flashy defender like Garrett but he's reliable and plays team defense as well as anyone.

The ball handling is noteworthy, but KU also brought in a few ball handlers to help take some of the burden off of him — Remy Martin and Joe Yesufu, most notably. Sounds like Christian Braun's ball handling also has come a long way. So maybe Ochai won't need to handle it as much as in the past.

Love the analysis as always, Matt. I think his ball handling in the half court and in driving situations needs to improve drastically. He is not nearly a good enough ball handler to take a defender off the dribble and get to the rim. I know that won't be much of a role for him this year but I think still noteworthy.

Really exciting to see all this coming together.

I wouldn't be surprised to see his number of attempts a little lower simply because they have more capable scorers around him now. There's no doubt that he'll still be a big factor in the offense, but just think about how many dudes they can put on the floor who can score (and shoot). It's pretty crazy.

Matt - Agree with the logic just not the math. It’s a nerd thing.

So, we are all the way down to a rock, paper, scissors article?

The dynamics of who will play together affects what someone has done in the past. As we have seen, Remy is going to shoot, Ochai will defer. Who plays defense will also be a factor.

40% is a stretch. I'm just glad Ochai has upped his intensity on the court as he matured. In the early days of his career he never even worked up a sweat in games. I mean he is super smooth, but seeing a player really sweat has always been a sign to me they are really maxing out. Last year I noticed Ochai really sweating more in games. Sort of a weird thing I notice....lol