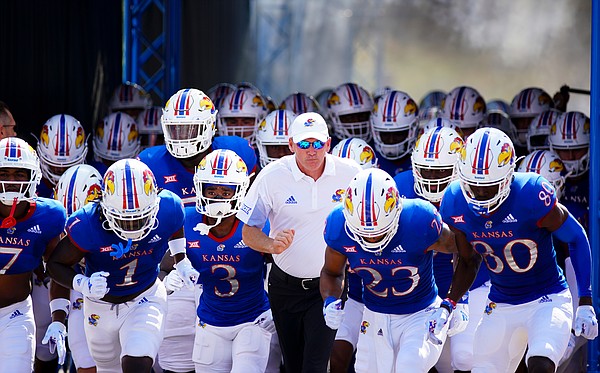 Kansas head coach Lance Leipold and the Jayhawks take the field for kickoff against Baylor on Saturday, Sept. 18, 2021 at Memorial Stadium. (Photo by Nick Krug/Special to the Journal-World) by Nick Krug

Late during his regular Tuesday press conference at the Anderson Family Football Complex, Kansas coach Lance Leipold briefly interrupted a question from a reporter to set the record straight.

The question began: “As you’re trying to build this thing…”

The interjection went like this: “Oh, we’re going to build this thing,” Leipold said with a grin followed by a swig of water. “Not try. We’re going to.”

And Kansas fans should feel lucky to have a front-row, all-access look at how it’s going to be done.

The true turnaround still may be years away, if it comes at all. And the challenges that Leipold and his players and coaching staff face are too numerous to list here. But the confidence of the head coach does not appear to be one of them.

That’s worth noting because of Leipold’s demeanor in the aftermath of last Saturday’s 45-7 loss to Baylor. In his postgame press conference, Leipold was noticeably emotional and visibly upset about his team’s shortcomings and the way a 14-7 game at halftime turned into a bloodbath in the third quarter.

Kansas fans should want that. It’s good to see that losing a game like that affects him. If it didn’t, KU would be in jeopardy of walking down the same la-dee-da path of complacency after tough losses. No one has time for that.

Three games into his KU career, and coming off of a loss that he admitted “was a little bit more of a sting,” Leipold now has a better feel for exactly what he has gotten himself into.

And while life at Kansas is vastly different from what he experienced at Wisconsin-Whitewater or Buffalo, Leipold does not appear to have forgotten what it takes to build because of the success he enjoyed at his last two stops.

It starts with consistency. And while it may be a while before consistency of any kind shows up on the field on game days, we’re seeing it just about every time Leipold steps up to a microphone, win or lose.

He has proven to be very good at answering questions in a thorough manner and with the kind of explanations that help you see both what he’s talking about and what he visualizes down the road.

He has yet to face any real tough questions, but, at Kansas, aren’t they all tough in one way or another?

What makes his ability to answer them all the more impressive is that he’s answering questions mostly about issues he had no part in creating.

More important than any of that is the fact that Leipold always goes out of his way to remind anyone listening that the responsibility for everything that happens within this program now falls on him. Good, bad or indifferent.

“We have to do a better job coaching,” he said Tuesday. “It starts with us. We can’t be mad at the player whose on-the-job training is also on Saturdays.”

That concept of on-the-job training is a big part of this. Ask anyone in the program whether these players are willing to put in the work required to move Kansas football forward and they’ll say yes before you even finish the question.

But just because someone is willing to do something does not mean they’re ready to do it.

Think about how many 13-year-olds would happily hop behind the wheel of a car. And then think about what the streets in your town would look like if we let them. It probably would be the traffic equivalent of 45-7.

Leipold is rocking with a bunch of 13-year-old drivers right now. And while that may pay off at some point down the road, it also forces him to keep his focus on developing them the right way rather than expecting them to have it licked in a matter of a few weeks.

That’s why this coaching staff is so eager to push consistency and why that trait, if they can acquire it, might be the magic formula that brings about real change.

“It’s getting us to be consistent,” Leipold said Tuesday. “Individually and then within a unit and then a side of the ball and a team and all those things. Once we start seeing it more, confidence goes (up). And if you start stacking those (things) up, then you start playing better.”

KU’s next opportunity to do that will come at 3 p.m. Saturday in Durham, N.C., where the Jayhawks (1-2) will take on Duke (2-1) in their final nonconference game of the season.

I really like the Leipold tells us like it is. He doesn't sugar coat. If he can't or won't talk about something he says so. He doesn't throw out smoke and mirrors. In other words, he is not a politician. He is a coach, and a good one. We are very fortunate to have him and his staff. We need lots of patience. I like the 13-year-old drivers analogy. That kind of drives home what this staff is facing.

When my daughter was 11, we had an open field behind our house and an older car that was still very drivable but was going to be donated to charity in a few months. “Don’t tell Mom,” and we went out to take in for a spin. On the second trip, I mostly let go of the emergency brake. The 3rd time, she invited Mom, who was happy that it was something I could do with her. The 4th time, we changed things up and tried an empty parking lot. She was even starting to get a bit cocky about it - until she backed into a tree. It was a good lesson and fortunately not expensive. No damage to the car, and when I contacted the maintenance manager of the facility the next day, he said it happens commonly and was already on the schedule for replacement.

Good article Matt. There have been so many comments about who Coach Leipold is, what he’s like that go so far beyond the W-L history and all that is discussed in the search season that make me increasingly optimistic that this program has a chance. The last 2 second halfs have shown just how big a hole we’re in and it might have even surprised him. Still optimistic he/they/we can turn it around. It’s just gonna take some time.

I dunno about finding any “rhythm” - the Jayhawks need to find the bottom...and rise up. Things will get better.

Pretty sure the bottom was reached and the rise has started…..

We’re going to find local kids with heart - like Devin Neal and build this.

It seems that college football is often about finding some play makers. When coach is able to snag a few of those we will be on our way. Coach will find us a Todd Reesing, although I think Bean is great.

A random post about confidence, personality and coaching at Kansas.

Mangino, the coach that so many people on this site regard as great, had one winning record in the conference in eight years. Mason had two in nine. Mason won more league games than Mangino: 25-23, and had a 10-2 season very similar to Mangino’s 2007 team. Both coaches left KU with losing records in conference.

Both of these coaches had strong personalities. Mason thought he was the obvious hire at Ohio State and Mangino showed the nerve to call out the officiating vs. Texas.

Leipold is a different dude. As Matt points out, he has just as much confidence, but he has what appears to be a more analytical, systematic approach to coaching. He also had three straight winning seasons in-conference in the MAC at a school that does not have a winning football tradition.

Mason and Mangino were mercurial personalities. Both were brusque. Heck, I attended a quarterback club meeting once where Mason basically told an alum in the audience that he was an idiot.

I wouldn’t say that Leipold is like Bill Snyder, no one is that dull. But he is clearly different than any coach we have had here since Mike Gottfried. Time will tell if his approach is brings more consistent winning to KU, but I’m glad we have tried something new when it comes to personality. We need a steady and consistent approach to get this program where it needs to be.

Duke is -15.5 points in Vegas over KU this weekend? I may be a homer here, but I feel like Liepold's guys are about to piss off some people.