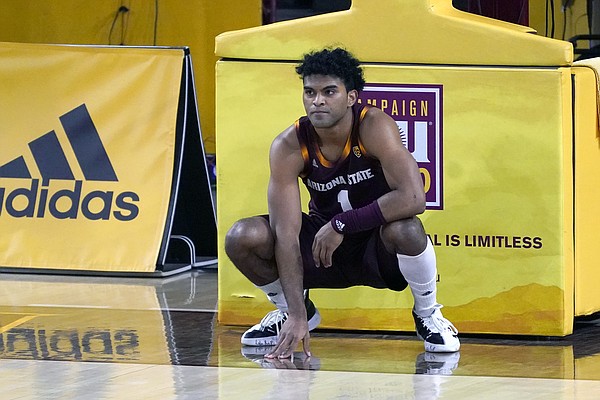 Arizona State guard Remy Martin (1) during the first half of an NCAA college basketball game against Arizona, Thursday, Jan. 21, 2021, in Tempe, Ariz. by AP Photo/Rick Scuteri

It’s no secret that the Kansas basketball program has had a successful run of solid point guard play during the past decade or so.

And, according to at least one current Jayhawk, that will continue during the 2021-22 season.

Agbaji immediately drew a comparison to a former teammate.

“Kind of reminds me a little bit of Devon (Dotson),” Agbaji said. “The way he can switch speeds and get downhill, particularly from different spots on the floor. His quickness I think matches Devon’s.”

Martin has yet to be made available to the local media since arriving on campus this summer, but those who have been around him have said that the Arizona State transfer already has shown that he’s willing to put in whatever work it takes to improve and fit in.

Perhaps more importantly, Martin has shown a willingness to operate as more of a true point guard, which is a slight depar-ture from his role as a high-scoring, volume-shooting lead guard with the Sun Devils.

Remy Martin comes to Kansas on the heels of back-to-back 19-points-per-game seasons at ASU. He tested his NBA draft stock this summer and elected to make the move to Kansas for one more crack at showcasing his skills for the folks in the NBA.

Beyond that, though, the new KU PG came to Kansas to win.

Despite his status as a new player on a team that returns four starters, Remy Martin’s skill, experience and personality make him the type of player who should be expected to make a ma-jor and immediate impact for the Jayhawks this season.

KU coach Bill Self said in August that Remy Martin was “thinking right” during the early preseason workouts. And Self noted that the new KU point guard’s speed, fire and passion would add a lot to the roster.

According to Katz, Remy Martin “could be the missing piece for the Jayhawks this year.”

The Jayhawks are expected to wrap up their annual boot camp conditioning session later this week and the first official practice of the 2021-22 season is slated for next week.

KU fans are scheduled to get their first look at Remy Martin in crimson and blue on Oct. 1 at Late Night in the Phog.