Baylor beatdown a tough reminder that Kansas football still has a long, long way to go 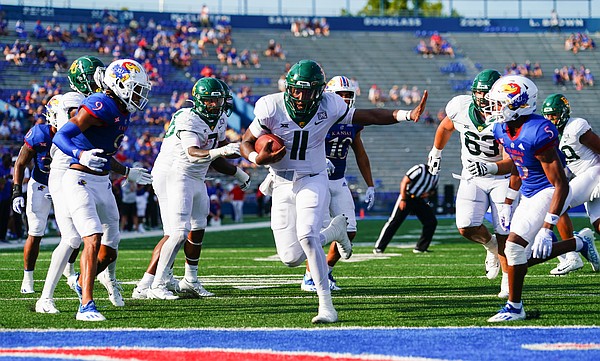 Baylor quarterback Gerry Bohanon (11) gets into the end zone untouched by the Kansas defense during the fourth quarter on Saturday, Sept. 18, 2021 at Memorial Stadium. (Photo by Nick Krug/Special to the Journal-World) by Nick Krug

Before we get too far into this column, let me start by saying that none of what you’re about to read should come as a surprise.

Yet, because of things like human nature and emotion and hope, there we were on Saturday morning, seeing and hearing from Kansas fans who genuinely believed that the Jayhawks not only could be in the game with Baylor but also could win.

Roughly as many people showed up for KU’s Week 3 game and Big 12 opener as were there in the season opener. And by early in the fourth quarter nearly all of them were gone.

Just like that, a day and game that started with some excitement and optimism ended the way we’ve seen so many KU games end in recent years — with a lopsided outcome on the scoreboard and the cold, hard glare of concrete serving as the backdrop for the final meaningless minutes.

This is not the fault of the current coaching staff or even the players who were out there fighting on Saturday. This is the fault of reality. And the reality is KU still has a long, long way to go before it can expect to be competitive in the Big 12 Conference.

Remember, this was an unranked Baylor team that had not proven anything yet. Not only that, this latest Bears team to lay a beat down on Kansas wasn’t even one of the 21 teams that received votes in this week’s Associated Press poll.

You know who was? Five of KU’s final nine opponents, meaning that seven of KU’s nine remaining games will come against teams that were either ranked or receiving votes this week. Generally speaking, those aren’t the kinds of teams that this Kansas team can be or should be expected to beat.

It’s things like that, and outings like Saturday’s, that should — and now likely will — keep Kansas fans from overreaching for relevance the rest of this season.

Lance Leipold was hired to rebuild a program that was in the gutter long before he ever considered taking on the challenge. It was never going to happen overnight.

It was clear during the postgame press conference that this unfamiliar feeling is not one that Leipold is used to or willing to accept. That can only help. But even with that, the progress is going to be a slow-and-stalling sort of thing.

Leipold’s message to his team after Saturday’s game was simple: Own the beating, accept responsibility and come back more motivated than ever to improve.

It’s really all they can do. And it’s what Leipold and his coaching staff will demand, which, in the big picture, provides some long-term hope.

The hope that comes in the short-term, though, is just too fragile to be real.

Consider the most gut-wrenching part of Saturday’s blowout as proof of that.

After surviving an ugly first quarter and finding their way back into the game in the second quarter, the Jayhawks trailed just 14-7 at halftime and had all the momentum on their side heading into halftime. For that 20-30 minute portion of Saturday, KU appeared poised to make its believers look awfully good.

And then, just five plays into the second, it was over — the game, not just the momentum.

A three-and-out by the Kansas offense. A KU punt. And a 69-yard touchdown pass by Baylor on its first offensive snap of the half put this one on ice.

The rest was merely a formality and it set up an October and November that will test both this team and its fan base that proved through two home games that it was willing to show up to support this team.

I tend toward optimism. I figure fans would have stayed had we still had a chance in the game in the fourth quarter. Given that the game was all but over, and it was nearing dinner time, time to get cleaned up for the planned evening out, then there was no real reason to stay other than to show the players and coaches that we support them through this tough rebuild even when we are being severely thrashed. Of course, there are not many fans like that. My wife and I would have stayed to the end but, unfortunately, we are 1500 miles away and had to watch, to the end, on espn+

I have no doubt this team will get better. It will be a slow process but I want to follow it all the way.

I wonder the reaction of the recruits in the stands.

We were on the verge of a blowout in that first half. I was impressed that the team stayed with it and kept it close. It wasn’t long ago that Mike Gundy was pulling starters before halftime.

It was ugly. No way around it. Sometimes, though, it pays to trust your eyes. Baylor is good. They have some big time athletes and are performing at a high level. I believe that they would manhandle Coastal. And I believe that they will finish in the top half of the Big 12.

I may be wrong. If I am, it will be a brutal year. There is only one question: how do you use the year to make the program better?

I find it interesting that, yesterday, Buffalo (with Leiopold's team through last Spring) lost to Coastal Carolina 28-25, at Buffalo.

I definitely didn’t expect a win, but I did hope to see something positive. It was amazing that we were within a score at the half. It wasn’t amazing at all that BU went for it on 4th down. We weren’t doing much of anything to stop them and virtually nothing on O either.

I don’t tend to leave early regardless, but can’t really blame those that did when there was so close to nothing to cheer for.

I fully agree on the 4th downs. Not only were we not stopping them, even if they lost the ball we weren't doing anything on offense to take advantage of the short field position. Pretty much nothing to lose in going for it.

I will accept that some of those 4th down attempts may have been based on field position, where they were too far for a field goal attempt but too close to punt effectively, however I thought that showed a big lack of class by Baylor. We weren't much of a threat to turn it into a shootout where every possession mattered and that felt unnecessary and pretty cheap by them. That said, I will fully recognize that it is our job to stop them in those situations and we failed to do it.

I would add another long to your headline Matt.

Bigger, stronger, faster has been my motto. Clearly Baylor was superior in all ways. The game could be summed up on a play were KU's starting linebacker, Potter went to tackle one of the Baylor running backs, and Potter just bounced off. The offensive line continues to struggle mightily and if KU's offense continue to have 3 and outs, this type of lopsided score will be the normal and indicative of the season and a few more seasons to come. To be fair, Leipold and staff should be given time to recruit their players (please note that Buffalo gave Coastal who dominated KU all they could handle). Maybe a mere 16 to 17 years (2025-2026) following Lew Perkin's firing of Mangino (2002-2009) KU fans can hope for a winning record. One can always dream.

I didn't notice. Did Grunhard play or is he still injured? Sure could use him on the line, assuming he wasn't there.

Our linemen are probably the worst in the entire FBS, how does that happen? Even SDS had a better line than us. This has been the same scenario since 2010-11 when most of Mangino's recruits were done playing.

Remember this, Terry Allen had a better record his last season than Mark Mangino did his first season following Terry Allen. But, we knew Mangino was a much better coach by watching how much better his team played than Terry Allen’s and how much more competitive they were. Did it show up in the win/loss column, no. And don’t expect this coaching staff’s improvements to show up on the scoreboard or win/loss column either this year.

I was disappointed in the final score (as were all Jayhawk fans). But, I believe in Coach Leipold and his staff.

Going into the half down 14-7, I was hoping for better 🔥 in the belly from Jayhawks OL. But obviously, they still have a long ways to go.

I will continue to listen or watch to see weekly improvements.......

Brett - Baylor might finish in the top half, but at least one ranking program (Sagrin) has them as the 8th best team in the Big12 at 36th or something like that. Only TTU at 40-something is worse and hardly within sight of our 120-something ranking. It likely will be a brutal year, and a challenge to stay positive in encouraging the players to keep working extra hard.