This week's big question: What awaits Kansas football at Memorial Stadium in Week 3? 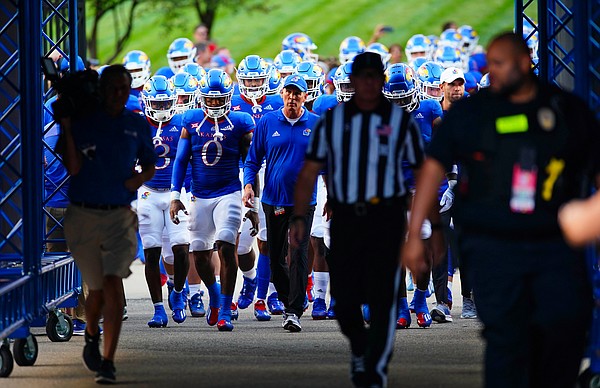 Kansas head coach Lance Leipold and the Jayhawks take the field for kickoff against South Dakota on Friday, Sept. 3, 2021 at Memorial Stadium. (Photo by Nick Krug/Special to the Journal-World) by Nick Krug

Two games into the 2021 college football season, the Kansas Jayhawks sit at 1-1 and with an equal number of reasons to be encouraged and frustrated.

What that means to the long-suffering Kansas fan base that showed up in force for the season opener two weeks ago will be revealed at 2:30 p.m. Saturday, when the Baylor Bears come to town for the Big 12 Conference opener for both teams.

First-year Kansas coach Lance Leipold knows what he’s hoping to see. So do the players, first-year Athletic Director Travis Goff and the rest of the KU administration.

“It’s a chance for us,” Leipold said Tuesday. “I’m just glad to be at home again, and hopefully our fans — and of course the students — that were so impactful in the first game of the year come back out and watch. And hopefully they see that this group is working hard and that they can be an impactful thing for our conference opener.”

Given the opponents, those outcomes are almost as drastically different as KU’s first two outings, which produced a close-call win one week and a 27-point road loss to a ranked opponent the next.

Leipold said Tuesday was the first time he had even considered whether he wished KU had another so-called tune-up game before jumping into Big 12 play. But the numbers show in might not have been a bad thing.

KU, meanwhile, is 71st nationally in total defense and 103rd in total offense.

Baylor’s numbers? The Bears rank 16th in total defense and 11th in total offense. So, yeah, maybe that Duke game to close out the non-con schedule this week wouldn’t have been so bad after all.

Then again, this coaching staff and this administration are not wired to determine the health and hope of the Kansas football program by how things look today.

“We’re going to have positive things happening that aren’t always going to show up on the scoreboard that are going to be signs of progress,” Leipold said Tuesday, voicing a popular refrain from the past decade.

But then he added the key part.

“And we have to balance those and keep working on those but not get into moral victories and think that’s going to do it for us," he said.

Win or lose, finding a way to keep the stadium full and rocking the way it was during the opener into the meat of the season would qualify as a moral victory in its own right. And that would be one worth celebrating.

Now it’s time to see if there’s anything the Jayhawks can add to it.

Early in the season, when games are played amongst 258 teams with a wide variety of abilities, it can be tough to really gauge the abilities of the teams based solely on the scores. One of the few places that does try to compare all the teams is the Sagrin ratings. There are some significant anomalies in it if you consider even a few of the games (ut-sec, ou-tosu), but it still is one of the few places that does compare all the teams.

I went there to find out how imposing the bu victims were. The last isn’t found until a few spots from the end; Texas Southern #250. The first, Texas State, #135, ironically is one place above South Dakota. Bu only won by 9 in their opener, so maybe we’ve a better chance than some seem to think. Last year was 47-14. Ouch.

Las Vegas certainly seems to believe that, so they must be thinking along the same lines as you by setting that line at BU -14 to open. It's climbed up to Baylor -18 (as of this message) and is either setting up as a trap game for bettors who laid the points or another blowout in BU's favor.

The answer to which one is accurate could go a long way toward keeping Kansas fans interested the rest of the season.

BU has been a lot better than us for the past decade so that would seem to support the early betting. Heck, even last year that was decidedly subpar for their recent standards/expectations still resulted in a drubbing, so the betting is understandable. If we can win the betting line, I’ll take it as progress. I’m really interested to see how you/Benton think we match up against them.

Surprisingly well in several areas, but I think the KU O-Line remains a major concern and could be a real problem area in every matchup.

Linebacker is another spot where I think KU is overmatched right now, which, in the Big 12, hurts in both run defense and coverage.

Baylor had a transition year last year and we haven't really been able to take much away from their first two games because of the opponents. So we'll still be learning a lot.

The good news for KU is Baylor's D has just 3 sacks through 2 games and is giving up 120 yards per game on the ground. So the O-Line, if it performs well and shows improvement, could have a chance to be a factor in this one. Have to see it to believe it, though.

As for the rest of the stats, it seems like Baylor is right there with the Jayhawks in any areas where KU has done well and may have an advantage on paper.

Bottom line: To have a chance, KU has to continue to play mistake-free football in the turnover game and find a way to get the ground game going a little earlier and a little better.

...and fix those issues with the kicking game.

No question. Meant to include that, but almost feel like it goes without saying. It hasn't always in the past 10/11 years, but it feels like it does now. Of course, Leipold said it a bunch on Tuesday and it sounds like he believes the issues were very correctable. We shall see...

As Forrest Gump once said "Kansas Football is like a box of chocolates. You never know what you're going to get." Rock Chalk!