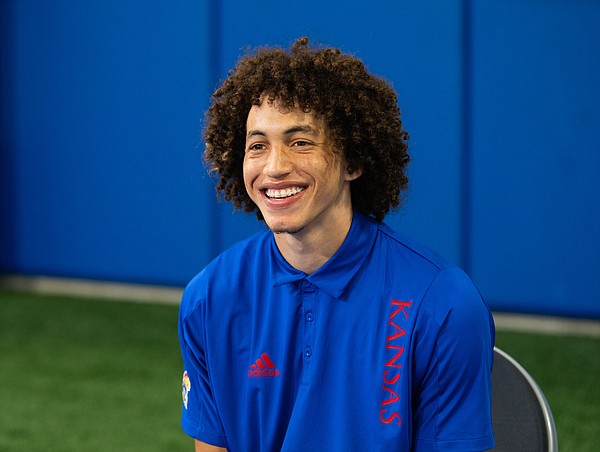 First-year Kansas football coach Lance Leipold still has until Friday night to reveal the identity of KU’s starting quarterback, but it seems like several people following the race already have made up their minds.

So I figured why not join them?

For me, this battle has come down to two Jayhawks — senior Miles Kendrick and sophomore transfer Jason Bean.

Before I go any further, let me remind you that my opinion is based almost entirely on what I’ve heard and learned from talking to people and not from watching the competition play out in practices, the bulk of which were closed to the media.

All three QBs vying for the starting nod, including sophomore Jalon Daniels, have traits that make them appealing choices. You’ve surely read or heard plenty about those. On Wednesday, offensive coordinator Andy Kotelnicki said he'd be comfortable with any of them playing.

But it’s two of those strengths that have me down to Kendrick and Bean.

Kendrick’s ability as a game manager could be ideal for the kind of offense KU wants to run in Year 1. Rely heavily on the ground game, ask Kendrick to throw it 12-15 times a game — high percentage throws at that — and allow him to use his maturity and poise to lead the offense and avoid trouble.

Bean’s speed and ability to hurt opponents by taking off and running make him an intriguing option, especially given the fact that KU is expected to feature its ground attack this season.

Highlighting those two is in no way intended to be a knock on Daniels. Remember, he’s still just 18 years old — he won’t turn 19 until Oct. 29 — and, in a sense, he’s still just a freshman.

The experience he gained last year, though important and real, came under such duress and took place in extreme circumstances that extended beyond just football.

Giving him a more natural chance to develop may benefit him a great deal in the future. And because of his age, he still has the potential to be a two- or three-year starter down the road.

Confidence and personality are not issues for Daniels. So let him spend the year competing, working, growing and improving while staying ready to roll in case he’s needed.

It’s entirely possible that he will be, even if he starts the season on the bench.

Choosing between the two is kind of like playing the lottery.

If you go big, and you go with Bean, hitting the right numbers could bring life-changing money. But if you’d rather play it safe and you want to go with a $5 scratcher ticket, don’t be surprised if even a win only brings you 50 bucks.

No matter which QB the Kansas coaching staff picks, none of the three probably changes the win/loss record all that much this season. So you really can’t go wrong with any of them.

But Leipold has talked a lot about getting games to the fourth quarter and being more consistently competitive than KU has in the recent past, win or lose.

Kendrick and Bean, in different ways, seem best suited to do that. And, of the two, Bean brings the more exciting skill set and greater potential to the field.

No disrespect to Kendrick, but he's already had 5 years to show he's THE guy and hasn't........I believe we need to go with a guy that will be around next year so he can build on this year. This one year stop gap stuff at QB is insane! Reps, guys need reps and giving them to a guy that will be gone next year seems silly. He's not good enough to warrant that. Think about how good Carter Stanley would have been by the last year had they not passed over him several times. Let's not keep repeating the same mistakes. Especially when this is a building year and not many (if any) wins are expected. If we were fighting to go to a bowl and his Senior leadership and talent was enough to get us there then fine....... but that's not reality.

Good call, Glen. Pretty reasonable thinking, if you ask me. We'll see what happens in a couple of days.

So many unknowns in this scenario. And so many twists and turns in how the position and decision could impact the program.

In reference to Matt and Benton’s podcast, there really is “A Lot” riding on a game against South Dakota. And boy does that statement tell you everything you need to know about the past ten years of KU football.

I’m going to try to think like Lance Leipold. Jobs 1-100 are to win Friday and win solidly. All other considerations are moot. This won’t push a pro like Leipold to panic, but I think it will move him a little in his decision.

Leipold may believe that his probable starter next year is still playing high school football or playing JUCO or getting ready to transfer from somewhere. So I’m not sure if he will be focused on future QB development this year. For Daniels to start, I think he would have to have demonstrated a clear lead in the competition during camp. And frankly, he may have PTSD after that Ryan Willis-like beating he took last year.

When my son played hockey out in New England, there was a well established tradition with coaches: if you weren’t 1st or 2nd line by your Junior year, then you weren’t going to make the team. Third-line shifts were used to develop up and coming players who might contribute later.

Based on absolutely nothing, I think Leipold rejects Boston High School Hockey philosophy. I think he goes with Bean to create a dynamic run and RPO offense that has big play potential on the ground. If Bean is shaky, Miles comes in to calm the waters. Whichever guy starts, let’s hope that he’s wicked good on Friday.

What about Hawley and Easters? I know they're not ready now but are they seen as potential future starters? Just wondering.

Bean builds enthusiasm and since none of the QBs have separated themselves he would be my choice.

Kendricks has been just a manager, and hasn't had teams to manage and we know the results.

Daniels got every opportunity last week, and he got beat down. He needs more coaching to get them to the college football level. He might be ready next year, but this year should be his red-shirt year.

Good article Matt. I tend to agree with you and the other posters thus far. The strength of this offensive unit are the running backs. Unless you have a high level passer as an option so the defense doesn't load up the line, I would think a running QB would compliment this group the best - and hopefully open up some WRs down field occasionally for deep passes.

Only way Kendrick is successful is if the coaching he has received in his previous years here has been very poor. It must have been poor enough a talented kid could not overcome it. If Zebrowski is that good, we are in for some fun times in the future. I will simply trust this staff until they prove they should not be trusted.

Glenn - If you go back to fall 2019, you might find the article where Carter commented on recognizing and changing the reason he hadn’t started in previous years. He admitted to previously chasing home runs instead of taking base hits. Like many, I too had wondered why he wasn’t playing more previously, but that was his observation and correction. According to him it wasn’t about coaching though that’s the more popular punching bag.

Bean is the fastest and Daniels has the biggest arm, but Kendrick has the highest completion %. Completion % translates to who is most likely to complete a pass and keep a drive alive? That sounds like the consistency that the coaches have said they value. I’ve always said that 60% is a bare minimum with 2/3 or more being needed to succeed. Kendrick is the only one that has that consistency. Maybe Bean or Daniels developed more during camp. They sound like they have the higher ceiling.

As for Bean’s running ability fitting with the ground attack; maybe. But maybe it just encourages the D to load the box all the more with less room to run for all. If we can consistently get the ball to the young receivers, there’s plenty of speed to keep the D honest and open running lanes for the RBs.

I read somewhere today where either Fuchs or Kotelnicki said Bean lately has improved his accuracy. If he plays I hope that translates to a better completion rate. Of course, half the factor of that completion rate is ability of the receiver to catch and then hang onto the ball. I'm hoping we will find we have ends of that formula.

I would select the quarterback who has demonstrated the ability to lead a team to a win. I am not as big on individual stats as much as if they can lead a team to victory. The Mean Green were 4-6 last year and Bean started 7 games (not easy to find out how many wins for which he was the starting QB but I believe he was the starter for 3 wins and 4 losses in 2020 - not great against lesser competition). However, between Daniels and Kendrick combined they led KU to a record of 0 wins and 9 losses. Matt, how many wins has Kendrick been a part of as a starter for KU - ("saw action" in 4 games in 2018 before taking a redshirt)? So based on my metrics from these three QBs, Bean has the upper hand.