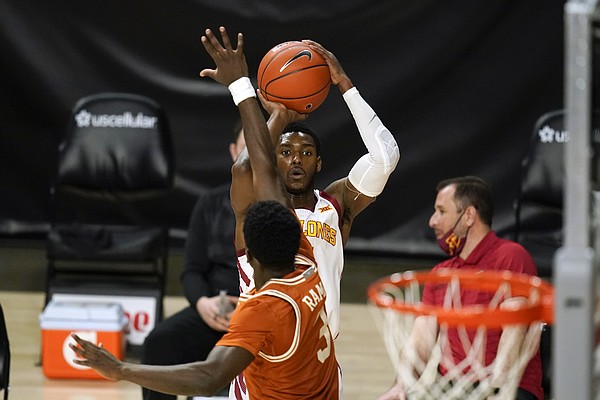 We’re now less than a month from KU’s lone exhibition game of the season (Nov. 3 vs. Emporia State) and just over a month out from the season opener against Michigan State at the Champions Classic on Nov. 9 in New York City.

As the Jayhawks start to ramp up their preparations for the upcoming season, we’ll continue to take a player-by-player look at what you can expect from this year’s roster.

Up next: Senior guard Jalen Coleman-Lands, a transfer from Iowa State, who, like Mitch Lightfoot, is one of the oldest players in college basketball at age 25.

He Will: Find a spot in the rotation

When Coleman-Lands committed to Kansas, many people viewed his addition as insurance against Ochai Agbaji deciding to stay in the NBA draft.

And while there may be some truth to that, the fact remains that Coleman-Lands brings enough to the table to warrant legitimate minutes this season.

Not only is he in the conversation for best pure shooter on this roster, but he also has good size (6-5, 194), legitimate experience and the type of attitude and demeanor that allows him to fit into any situation. That versatility extends to his playing style, as well, as he is much more than just a deep threat. He likes to play defense, isn’t afraid to mix it up and can get out and run.

His game-to-game usage might not be completely consistent during his lone season with the Jayhawks, but, looking at the season as a whole, there’s little doubt in my mind that Coleman-Lands will be a factor for this team.

His ceiling, in terms of a role, is as high as him becoming the seventh or eighth man in the rotation. And his floor is probably as a situational gunner who can give KU’s outside shooting a lift on any night.

Either way, I think he plays plenty during his one season in town, both because of his talent and his status as a terrific teammate and potential glue guy.

He Won’t: Need big minutes to impact this team

This one kind of goes along with the first entry, but it’s worth emphasizing, given the depth and battle for minutes that so many Jayhawks are facing this season.

Even if Coleman-Lands is limited to spot duty — which would probably amount to an average of 7-10 minutes per game — his ability to shoot the ball could still make him a factor.

In the past, KU has had plenty of shooters who enter games in certain situations to knock down a few outside shots. And Coleman-Lands certainly could fill that type of role this season. He’s here to have fun, to learn, to soak up the final days of his college experience and, most notably, to win. So you won’t have to worry about hearing anything from him about a lack of playing time or low minutes if that is in fact what winds up happening.

His maturity and perspective have prepared him for anything and everything that could possibly happen this season. Because of that, he’s ready to have a positive impact whether he plays 20 minutes a game or is simply a tenacious practice player.

His track record and experience suggest that he’ll be more than the latter. But even if there are stretches of the season where JCL gets lost on the bench, he’ll find other ways to help this team win, whether that’s from the bench, in the huddle or during the week’s practices.

We might as well close this one out by carrying on with the same theme, and I think this one might be the most relevant of the three.

Coleman-Lands is an experienced and talented Division I basketball player who has started 102 of games during his 133-game college career.

Those starts might have come at Illinois, DePaul or Iowa State, and not a place like Kansas, but it’s not like those schools are Tarleton State. They still field tough schedules and play in legit conferences. Coleman-Lands has seen plenty of quality competition during his playing days to be able to step right in if asked.

Because of his size and versatility, he could slide into the starting lineup at the 2 or the 3 and give Kansas quality minutes.

The most likely scenario that would lead to him starting a couple of games this season includes an injury to one of KU’s primary starters.

And even then, there are plenty of other players on the bench that he would have to pass to wind up in KU’s projected starting lineup, with sophomores Dajuan Harris Jr., and Joseph Yesufu most notable among them.

Coleman-Lands isn’t concerned about whether he’ll start or not or how many minutes he’ll play. He came to Kansas for the experience, to go out with a bang and to win at the highest level possible.

That mindset and his skills make him a heck of a luxury on an already loaded and deep team.

Coleman-Lands is the type of player that Kansas fans are going to wish could stick around a while longer.

JCL is one of the players I’m looking forward to seeing. It seems like we should be 2-deep across the board with really solid players so there should be no holding back anything at any time during the game. Just ultimate intensity, take a couple minutes off while the next guys keeps running the opponents ragged, then back at it fresher than ever.

Yeah- if there ever was a year to actually use a 9-10 man rotation, this is it! I think it’s likely we end up with Self’s usual solid 7rotation (ie 7 players getting 12+ min. per game) with 3 more consistently chipping in 5-7 min. per contest. I think we’ll see an increase there with that latter group getting more pt that normal