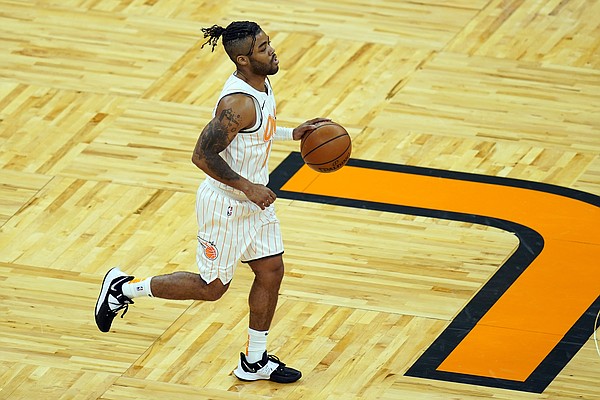 Orlando Magic guard Frank Mason III moves the ball against the Chicago Bulls during the first half of an NBA basketball game, Friday, Feb. 5, 2021, in Orlando, Fla. (AP Photo/John Raoux)

Former Kansas standout Frank Mason is getting another shot in the NBA.

This time it comes with a veritable all-star team of legends in Los Angeles.

According to a tweet from NBA insider Adrian Wojnarowski, Mason has signed a training camp deal with the Los Angeles Lakers.

Now in his fifth season as a pro, Mason, if he sticks, will be playing with his fourth team in that time. After being drafted by Sacramento and spending two seasons in the California capital, Mason spent the 2019-20 season splitting his time between the Milwaukee Bucks and Milwaukee’s G League team. He followed that up with a short stint in Orlando in 2020-21.

The former college national player of the year appeared in 103 games during those four seasons, making three starts and averaging 6.7 points in 15.7 minutes per game.

In 2020, Mason was named the G League MVP after a stellar stint with the Wisconsin Herd.

He played for the Philadelphia 76ers Summer League squad this summer before being released. Upon his release, Mason tweeted: “I want to give a big thanks to the @sixers organization for giving me an opportunity to join their summer league team. What a great staff and first-class organization. Thank you guys.”

It remains to be seen if there’s an opportunity for Mason on the Lakers’ NBA bench. But if one presents itself, he would be joining a roster that not only features LeBron James and Anthony Davis — two of the top 10 players in the game today — but also includes Laker newcomers Carmelo Anthony and Russell Westbrook.

While Westbrook and Rondo are clearly pencilled in as the Lakers' top two options at the point, the only other player on the current Lakers roster listed as a point guard is Joel Ayayi, a rookie from Gonzaga who is signed a two-way deal with the franchise after going undrafted.

Former Oklahoma standout Austin Reaves, along with former Texas Tech gunner Mac McClung also are on the Lakers' revamped roster heading into the season. Both are candidates for roster spots with the Lakers' G League club, the South Bay Lakers.

Bonus points for the Lennon reference!

LeBron hasn't won a title without a KU player on his roster......

Right now, there are no KU players on the LA roster...... could this be the earth balancing addition LeBron needs?! LMAO