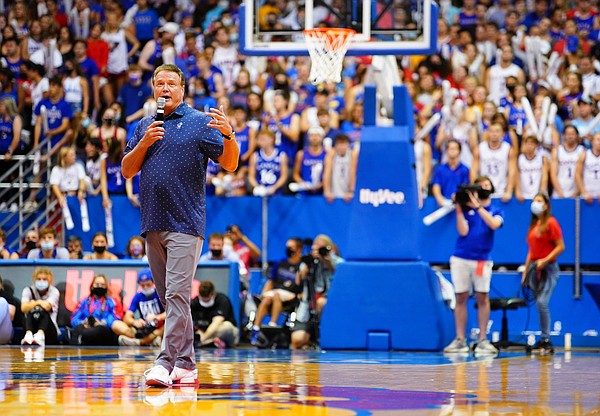 Kansas Jayhawks head coach Bill Self talks with the crowd during Late Night in the Phog, Friday, Oct. 1, 2021 at Allen Fieldhouse. by Nick Krug

When the ball goes up for the opening tip at Saturday’s closed-door scrimmage between third-ranked Kansas and Tulsa, the environment figures to be far different than what most of the Jayhawks have experienced in the past.

Even last year, when COVID, impacted attendance numbers across the country, the Jayhawks played most of their 30 games in front of at least some fans and with a little energy in the atmosphere.

At this one, there will be no one. According to NCAA rules, only those necessary to conduct the scrimmage will be allowed in the building on Saturday. That means team personnel, players, coaches, officials and maybe an administrator or two.

As a result, there will be no official stats, videos or photos released from the game, and both programs will move on rather quickly from it, with KU slated to host a full-scale exhibition game next Wednesday against Emporia State at Allen Fieldhouse and Tulsa opens its exhibition slate that day, as well.

Both teams are free to track and chart their own statistics and notes, but they are not to share them publicly.

The unusual set up is just one of the reasons that Kansas coach Bill Self is not planning on heavily evaluating what does or doesn’t happen during the scrimmage.

Asked last week, at Big 12 media day, what he expected to get out of the scrimmage, Self kept his answer short.

When asked this week about KU’s two tune-ups for the Champions Classic clash with the Spartans on Nov. 9 in New York City, KU newcomer Remy Martin said both would be big for this new-look roster.

“It gives us the preparation,” Martin said. “And it gives us a good feel of what’s going to come our way.”

For what it’s worth, Tulsa returns six players from last year’s roster, including three of their top seven scorers from the 2020-21 team. That list includes reigning American Athletic Conference Sixth Man of the Year Darien Jackson, a 6-foot-3, 203-pound senior guard who averaged 7.6 points and 4 rebounds in 25 minutes per game last season.

Among their notable victories a season ago were a regular-season sweep of Memphis, a one-point home win over eventual-Final Four participant Houston in late December and a road win at Cincinnati.

Tulsa’s season came to an end with a first-round loss to Tulane in the AAC tournament.

Frank Haith’s eighth Tulsa team was picked to finish seventh in the AAC in this year’s American Preseason Coaches Poll.

Classic lack of logical sense from the NCAA. No statistics available haha. Such a joke. Can't wait until the NCAA is completely extinct.

Our deep bench should play all the 2nd half. If Coach see's very little will be gained, lets keep everyone healthy at least.

Matt - It used to be that we would rotate playing 2 of the small KS schools in exhibitions each year. Was there a rule change leading to just one exhibition?