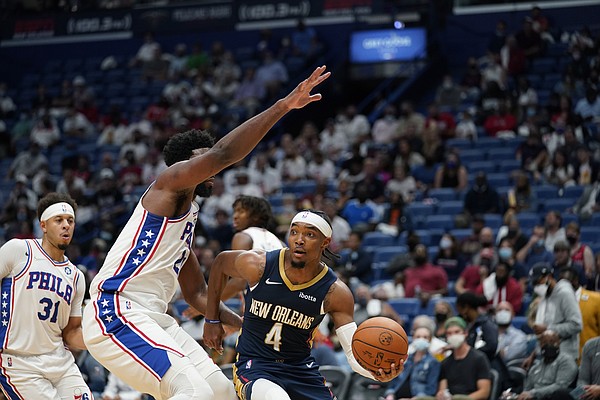 Thirteen former Kansas basketball players tipped off the NBA’s 2021-22 season this week, tying for the third most among NCAA Division I schools.

“We hope you all kill it,” Self said. “You’ve always represented us in a first-class manner and everybody that supports Kansas University and our basketball program are all so proud of you.”

Two of those 13 former Jayhawks — Devon Dotson with the Chicago Bulls and Marcus Garrett with the Miami Heat — opened the season on two-way contracts, meaning they’ll likely split their time this season between the NBA clubs and their G League affiliates.

Former national player of the year, Frank Mason III, also is still battling for a roster spot in the league, following his recent Exhibit 10 contract with the Los Angeles Lakers that lasted all of 19 hours.

Self singled out that trio with a special message during the recent video.

“You know you’re built for this,” he said.

All 30 NBA teams have the ability to carry 17 players on their active rosters — 15 on an NBA bench and two two-way players per franchise.

The 13 Jayhawks scattered throughout the league cover everything from bona fide stars and regular starters to reserves and rotation players.

Here’s a quick look at the status of the former KU standouts who recently opened their quests for a world championship.

Golden State wing Andrew Wiggins, who played at KU in 2013-14 and was the No. 1 overall pick in the 2014 NBA Draft, is in his eighth season in the league and his third with the Warriors.

Former Wiggins teammate, Joel Embiid, is a four-time NBA All-Star who is in his eighth season with the Philadelphia 76ers. The No. 3 overall pick in the 2014 NBA Draft played at KU during the 2013-14 season.

Marcus and Markieff Morris currently own the title of longest tenured Jayhawks in the NBA. The twins played three seasons at Kansas, from 2008-09 to 2010-11, and enter their 11th seasons in the NBA. In 2020, Markieff became the 13th Jayhawk to win an NBA title with the Lakers and he currently is in his first season with the Miami Heat. Marcus, who had his No. 22 KU jersey retired in 2020, is in his third season with the Los Angeles Clippers.

Sharp-shooter Ben McLemore is in his first season with the Portland Trailblazers and his ninth season overall. McLemore spent two seasons at KU, as a redshirt in 2011-12 and a freshman in 2012-13, and was the seventh overall selection in the 2013 NBA Draft.

Kelly Oubre Jr. begins his first season with the Charlotte Hornets and is in his seventh season in the NBA. He played at Kansas in 2014-15 and was the No. 15 overall pick in the 2015 NBA Draft.

Wayne Selden Jr., who played at KU from 2014-16, enters his fourth season in the NBA and his first with the New York Knicks. Following KU, Selden played 2016-17 with New Orleans and Memphis, 2017-18 with the Grizzlies and 2018-19 with Memphis and Chicago. Since 2019, Selden has played in the NBA G League and with Ironi Nes Ziona in Israel, where his team won the 2021 FIBA Europe Cup and he was named the Final Four MVP.

Josh Jackson, the fourth overall selection of the 2017 NBA Draft, begins his fourth year in the NBA and his second with the Detroit Pistons.

Devonte’ Graham, who made a strong push for the NBA’s Most Improved Player honor last season, begins his first season with the New Orleans Pelicans after a successful three-year stint in Charlotte.

Svi Mykhailiuk, a former Lakers draft pick who played at KU from 2014-18, is entering his fourth NBA season and his first with the Toronto Raptors.

Udoka Azubuike, who teamed with Graham and Mykhailiuk to help lead Kansas to the 2018 Final Four, is in his second season with the Utah Jazz after being the No. 27 pick in the 2020 NBA draft.

Can't wait to watch all of our #NBAJayhawks this upcoming season...

Proud of you, fellas 👊

Thanks for the summary Matt. Really good to see Wayne has worked himself into a good situation.

Is there a similar article about players that left KU. Transfers and early entries? Maybe just the ones that are still playing ball?

I'd also like to know about KU players with overseas playing contracts and NBA front office jobs.