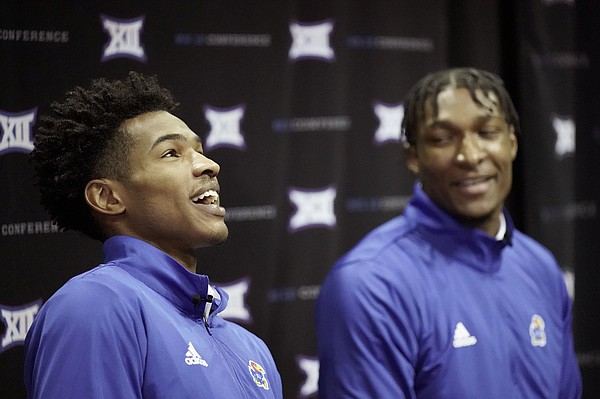 A tweet featuring a short video of Kansas forward David McCormack draining a full-court shot at Allen Fieldhouse recently caught fire, so on Wednesday, at Big 12 media day, I caught up with McCormack to ask him a little about it.

By far the most surprising thing to me about McCormack’s response to that shot was the fact that he was in no way surprised he made it.

Don’t get me wrong. He definitely seemed pleased they caught it on video. But it was not one of those once-in-a-lifetime type of shots for McCormack.

In fact, he said he’s made several of those in his life and that he began trying to perfect the shot a few years ago.

The 6-foot-10 center from Norfolk, Va., who recently was named to the preseason all-Big 12 first team said that he’s pretty confident he would at least hit rim four out of every 10 attempts.

Asked during the breakout session about incorporating his long-range accuracy into KU’s playbook, McCormack said he and senior guard Ochai Agbaji have talked about that.

“We could draw up a play,” McCormack said. “Me and O like to joke around sometimes, just like there’s half a second left and I’ve got good enough accuracy that I could throw it right by the rim for a quick tip-in. We might draw something up.”

As for who was catching the brunt of McCormack’s celebration on the video after making the shot, he said that was KU newcomer Joseph Yesufu.

“I was yelling at Joe,” McCormack said. “We were going back and forth trying to see who would make one first. He was close. But I tried to tell him in the long run, it’s what I do. I think that’s actually what I was screaming in the video.”

Are you not entertained pic.twitter.com/IRLDZ6TzBe

He made it look easy.

Wait a minute, if he shoots from out of bounds does it count? Even if it's from the opposite end of the court?

No, it doesn't count. But a play to tip-in would be as good.

I saw it on Facebook last night, and I was blown away! Just think if he were to hit that shot in the national championship game!

His reaction is interesting. No way he could make 4 out of 10. Lets hope he can tip in shots close to the goal.