After latest lopsided KU football loss, it's time to forget progress and focus on the process 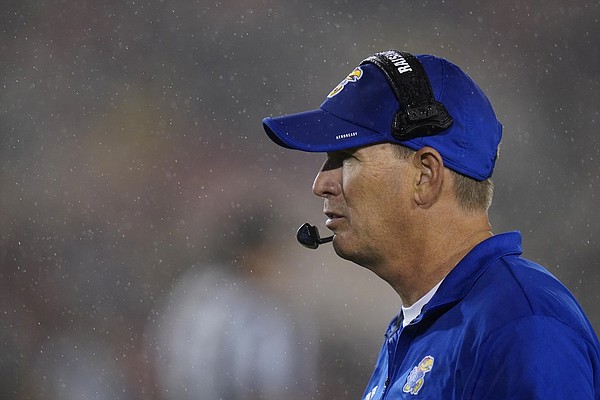 Kansas head coach Lance Leipold walks on the field during the second half of an NCAA college football game against Iowa State, Saturday, Oct. 2, 2021, in Ames, Iowa. by AP Photo/Charlie Neibergall

For Kansas football fans, there was not much to like about Saturday’s 59-7 beatdown in Ames, Iowa, a lopsided loss to an Iowa State team that is far better than its record or lack of a national ranking suggested.

But if you cheer for the boys in crimson and blue and didn’t see something like this coming, I’m not sure how to help you.

Vegas saw it. The Cyclones were a whopping 34.5-point favorite over the Jayhawks, and, despite their two losses, are still regarded by many as a top-15-type team.

Sure, maybe the final score could have been better. Or perhaps Kansas could’ve hung around for a half again before breaking. But, as the previous three weeks had shown, those things really don’t mean much to the outcome.

With a bye week up next — talk about terrific timing — let’s evaluate where the Jayhawks are five games into the Lance Leipold era.

But instead of looking at stats or searching for signs of life, the evaluation can be boiled down to one word.

And to find it, all you have to do is drop the second R and change the G to a C.

Because it’s not progress that should be measured this season, it’s the process.

Any time major changes take place in sports, it’s human nature to look for signs of progress. But expecting those in Year 1 of a new coaching regime — in Lawrence, Kansas, of all places — is more than a little unrealistic.

So, focus on the process instead, as ugly as it may currently be. After all, these types of rough outings and the lessons that can — and absolutely must — be learned from them are a part of that process.

And it’s much easier to embrace that line of thinking than it is to search for tangible signs of progress with a roster that is simply overmatched in too many areas to compete in the Big 12 Conference.

A couple of months ago, the hope within the program, and certainly of the fan base, was that these types of ugly losses — the ones that really sting and stand out in bright, bold numbers on the scoreboard — would no longer be in play under Leipold.

Someday, that will be the case.

But the man is not a warlock. He didn’t come to Kansas with magic potions, secret spells and the ability to make 6-foot-4, 240-pound linebackers who run 4.3-second 40-yard dashes appear out of thin air.

So forget measuring this season by progress.

Maybe Kansas will hold Oklahoma or Texas to fewer than 30 points. And maybe Kansas will cover the spread when it faces Kansas State or Texas Tech. Maybe Leipold’s Jayhawks will actually improve as the season moves on and wind up playing their best football in November.

This team has to get a lot better. And it’s on the coaches to make that happen. Period.

But as long as you can stand behind the approach Leipold is using and the culture he’s trying to create, then the here and now of it all will sting less and the process will be worth something.

If you can’t? Well, you’ll probably continue to be frustrated and perhaps even a little surprised when Saturdays the rest of the fall continue to play out this way.

Back in middle school a friend of mine started a band. Though he’d only owned a guitar for a few months, he played lead and fronted the band. In a matter of months, they somehow got a gig at a local Sonic. The small crowd suffered through a song or two and quickly drifted away. My friends band never amounted to anything but at nearly the same time in Ireland, another high school band was playing their first brutal gigs. That band eventually became U2. My point is this, Liepold’s band may produce some great albums someday but until then, I really don’t need to subject myself to Sonic gigs!! I’ll find something less painful to do on beautiful fall Saturdays!

Fun story. And I do not blame you one bit for not wanting to sit through it. That's what it's going to take, though, before fans can even begin to alter their expectations.

You could join me in rooting for a real team, like Iowa. The Hawkeyes are 5-0 and #3 in the nation!

I would suggest that the process will result in progress even this year. Definitely agree that it will be tough to see that progress this season. It’s tough for me to say “this year” when the first half of it was lopped off.

It will definitely be tough to see progress playing in the Big12. Some might see the ISU game as a regression after being in games for a half the weeks before. It seems to me that it is more about the greater quality of the opponent than whether our team progressed or regressed. Duke would hardly be competitive in the Big12 either. They were whipped by an ACC team (UNC) that in some ways is similar to ISU - highly ranked to begin the year but too many early losses to stay there.

The most important aspect of this season will be whether Coach Leipold can keep the players in it through the season. Last year they didn’t though that’s not inevitable. It was only a few years ago that the players stayed fully engaged for their coach even after he was fired and operated as a lame duck.

My last sentence is in no way indicating I think Beaty should have been retained. Just that not everything was a negative. Coach Leipold has shown himself to be both a coach capable of leading in games and out. It just takes time.

It is a process.

"Any time major changes take place in sports, it’s human nature to look for signs of progress. But expecting those in Year 1 of a new coaching regime — in Lawrence, Kansas, of all places — is more than a little unrealistic."

Add to that that these coaches did not have the Spring to install anything, not even the "culture." Four weeks is all they had before the season began.

Add to everything else that PFF says we have the 3rd toughest schedule in the country and it's very difficult to see where we would look anything but really bad in most of the games this season.

As said above, we'll get there. Give it the time. We have the right pieces in place (coaches and some talent on the team) to get things started. It is just going to take some time, a few years, to get to where we want to be.

I think you're correct. You may see signs of things moving in the right direction along the way, but the process as a whole is at least a few years of rebuilding and fighting through some rough Saturdays.

I just hope the coaching staff and players remember these beatdowns and use them as motivation and not get discouraged.

Matt As much as i like coach leipoldji ,i do not understand wh we dont use the clock and run more o pption in other words shorten the game. Osing by huge score does not teach anyone and demoralizes players and fans alike, in addition it reduces our options to get into another conference. If i go back 10 years, i will find you saying the same thing. I do not accept that losing every game 45-7 is progress and it cannot be process because it only teaches the players to be losers. Ku football is in a death struggle. We cannot assume that time alone will solve the problem. Rcjh

I think you missed the point of the column... In my opinion, it's time to stop desperately seeking signs of progress. Sometimes they're just not there. This is one of those times, and that's why you have to look at the process — what Leipold's doing, how he's doing it and his vision for a year from now and 5 years from now — and ignore the outcomes.

I don't recall ever having said this in the past. If anything, I've been as guilty as anyone of trying to find and write about the progress that is (or isn't) being made.

It's time to change the metric. And, yes, doing so requires patience, but I'm not sure what else KU can do. This thing is not going to be fixed in one season or even one year. Not by anyone.

It would seem that “assuming time alone” is ignoring all the work being done the other 6 days of the week. Progress is measured on game days, but the process is other days where the real teaching happens. Teaching the young players to be winners.