Offensive ineptitude keeps Kansas from having a chance vs. Texas Tech 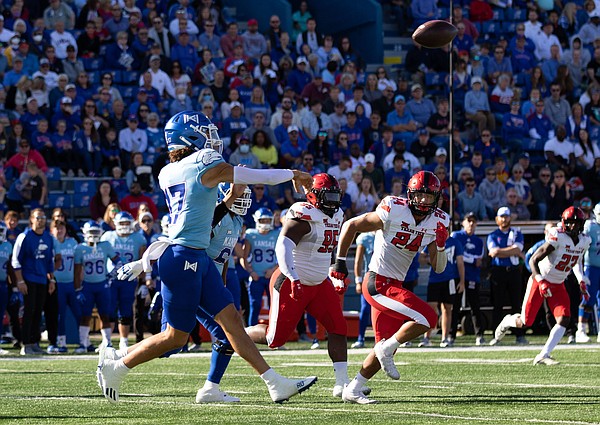 When you’re talking about a team in the midst of a five-game losing streak, the old chicken-or-the-egg question seems a little irrelevant.

After all, a loss is a loss, bad is bad and searching for silver linings is a waste of time. In KU’s case, week after week, the question sounds something like this: Which hurts first, the offense or the defense?

On Saturday, during a 41-14 homecoming loss to Texas Tech, it was the offense. And that’s the way things have been trending of late.

For what it’s worth, there’s probably no wrong answer here. But, at the risk of stating the obvious, you’ve got to score to be in a football game. KU has now done that exactly three times in its last eight quarters of football. And two of those scores came during Saturday’s final minute, when back-up QB Miles Kendrick led touchdown drives against a bunch of Red Raiders second and third stringers.

By then, the damage had been done. And even though Kendrick looked pretty crisp, it’s hard to say it mattered much in the big picture.

The Jayhawks should, though, be commended for fighting to the end. That, too, doesn’t mean much to most people. But it’s something that head coach Lance Leipold demands and believes needs to become a permanent part of the culture in this latest attempt at a turnaround. So, huzzah to that.

I’ve always been a big believer in the idea that defense wins, and countless teams — even at Kansas — have proven that to be true over the years.

But I also think there’s validity to the idea that offense keeps you in games. An effective offense also helps out a defense.

On Saturday, the Kansas offense did neither, even though there were plenty of opportunities to do both.

Despite the final score, this was not one of those brutal bludgeonings where the Jayhawks were outclassed from start to finish.

They had chances to score points, sustain drives and stay in the game. But the offense was unable to do it.

Against Baylor, Iowa State and now Texas Tech, Bean has completed 29 of 58 passes for 257 yards, zero touchdowns and two interceptions. Add to that no rushing touchdowns and just 10 carries for 33 yards in the past two games combined, and you’re starting to see the point.

So much of KU’s hopes on offense are tied to Bean. Not only does he have to make good reads and get guys the ball, but he also has to be good enough through the air to open things up for the Kansas rushing attack, therein giving KU better balance and more of a chance.

None of what’s above are light-the-world-on-fire types of numbers. And Bean certainly should not be expected to change the funk that KU is currently in all by himself. But in this conference, against nine other teams who entered Saturday averaging 35.1 points per game, the offense has to find a way to keep up.

If it can’t, well, it won’t matter what the defense does then.

Welcome to the current conundrum for Kansas football. Maybe the question shouldn’t be which side of the ball hurts first, but rather which one will get better first?

50% isn’t going to win many games. Unfortunately, the first 3 games aside, I believe that is Bean’s % for his entire collegiate career. There have been seasons when receivers seemed to drop passes at an alarming rate, or at least too many that would have resulted in points and kept us in games. I’m not sure that’s the case this year.

I’m also confused about completing or even attempting passes that are short of first down yardage on third down. Otherwise, even if you get the good side of the coin flip pass, the end result is still punting. Maybe I don’t understand. YAC is great but it seems important to start from a position of success on crucial downs in particular.

The uni’s would seem sweet in some parts of Carolina. And where’s the Jayhawk? What was the logo? Thought we went through the branding exercise to get away from this.

adidas is an awful company. Those uniforms are dreadful.

Watched the entire game, which was almost torture. There is no doubt in my mind that Lew Perkin’s legacy will live on another few seasons.

This team is so under talented compared to other power 5 teams.

We lack size, strength, and speed in all areas. Our linebackers are horrible and might be the worst position group, followed by both sides of the line.

In the 1st half, Army ran 20 times with zero passes.

Army opened it up in the 2nd half hitting 5 of 6 passes.

Hindsight is always 20/20, but Monken "might" have been a better choice than Leipold?

The following comment is NOT a knock on Leopoldo. Kansas isn’t ready for the kind of coach it takes to turn this program around. If it were Mangino would never have been pressured to leave. He could have been suspended and/or fined, forced to take sensitivity training, etc. But they called for his hea. As if we had the luxury of doing that. At KANSAS, no less! And there are still those who think his ouster fit the crime. Sign of the times, I suppose.

I dare say Monken would fare no better than Leipold. But let’s cut the latter a break. This is Kansas, after all. And many things about his arrival—timing, players, etc.—were not conducive to immediate success.

Letting Mangino go was the single greatest mistake in the entire history of Kansas football.

Joe, watching Leipold on the sidelines, it's like he's biting his tongue the whole game. You can see how mad he is but it's like he knows he has to hold it in a little bit because he can't afford to have 15 guys in the portal on Tuesday. I'm hoping over time, he can start to really let it fly, start benching linebackers when they get run over by a QB at the goal line, players when they lay on the field for two minutes every time they take any kind of hit, guys who won't run a kickoff out from the goal line, QBs who heave it out of bounds on 4th and 8... He seems like that kind of guy to me. His reactions are right but he just has to bite his tongue, he's got no choice.

The emphasis from Kusports is always offense. I get it. It’s more interesting to write about. But when you give up 49, 52, 45, 59 and 41 points in the last five games, you’re not only not going win games, you’re not even going to be in the game. As bad as the offense has been, the systemic problem is a horrendous defense that doesn’t even allow an offense, good or bad, a chance of even being competitive. Let’s hope KU spends the next couple of years emphasizing recruiting some solid defensive players.

It must be understood by the fanbase though it has been said many times. The kids that are playing have not been through a Big 12 development program. And until we are playing kids with 2,3 and 4 years of S&C Big 12 style, we will not be able to compete at the LOS. I am content to watch each year for incremental improvement in size, speed and strength. Having said that, the perennial problem at KU since TR left is having a competent QB. If Jason Bean is our QB next year, doubts will begin to creep in my mind on this staff. They had no choice this year. Next year is a different story with the portal, JC's and transfers in general. Let's get us a Big 12 QB and we will see some very talented WR and TE have some success.

Children, please stop all the bickering.

We have worked really hard to reach the bottom. Mistake after mistake over the last decade+ have created the depth of our ineptitude. We should not be shocked about how poorly we play.

Rejoice in the level of failure we have achieved. It is quite an accomplishment.

From top to bottom our football program and stadium clearly have failed on every level.

Coach L is starting from scratch, the cupboard is bare at almost every position. I have faith that this coach will find a way to succeed. We all have to; we have no other choice.

About the uniforms, the music, or whatever else you hated, no one really cares. It is not going to change. We are all going to suffer through another terrible season and look forward to next year.

There were three great things that happened this past Saturday afternoon; 1) the Air Force Falcons flyover, 2) watching the video board with the pre-game Jayhawk jet taking off and flying over Memorial Stadium (reminded me of the Mangino era!) and 3) the halftime show! The two worst things; having the football jerseys remind me of North Carolina and trying to figure out what that was on the side of the football helmets.