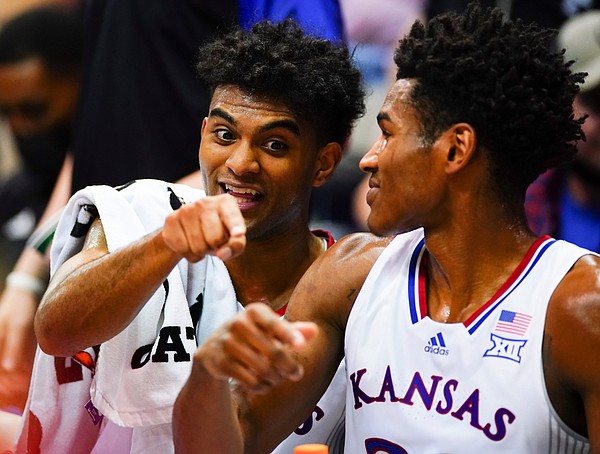 Kansas guard Remy Martin (11) and Kansas guard Ochai Agbaji (30) have a laugh on the bench during the second half on Wednesday, Nov. 3, 2021 at Allen Fieldhouse. by Nick Krug

New York City — Kansas basketball coach Bill Self knows what he would like to see from his third-ranked Jayhawks against Michigan State at Madison Square Garden in tonight’s season opener.

But the fact that it’s Game 1 of a new season couple with the fact that his team features eight new scholarship players has Self fully aware that things figure to be far from perfect against Tom Izzo’s Spartans.

“Deficiencies will and should be exposed,” Self said this week ahead of the matchup. “And that’ll give us plenty of stuff to work on.”

What he wants to see take place around those mistakes and shortcomings is a Kansas team that showcases pride and purpose.

“I hope that we play with composure and I hope we play with unbelievable excitement and pace and enthusiasm,” he said. “Sometimes when you do that it leads to carelessness, and I hope we kind of have a blend there where we can be sound and still yet be really excited to go play.”

Asked if he expects the Jayhawks to be able to deliver in those areas, Self said simply, “I don’t know yet.”

“We’ve got a piece or two that hasn’t been here,” he added. “And I don't know why we wouldn't be (composed and excited), but the thing about it is there will be guys more nervous for this game than there will be guys nervous for the first round the NCAA Tournament game, just because we haven't had 30 games under our belt or 35 games under our belt to get used to what's getting ready to happen in the tournament.”

While some Jayhawks, like Ochai Agbaji, Christian Braun, David McCormack and Mitch Lightfoot have had plenty of experience with both, several others have no experience with either. Beyond that, this team, as a whole, has next to no experience playing together on a stage as big and bright as the one it will encounter tonight.

“This is totally new to everybody and we’ve got eight newcomers out there,” Self said.

For some that will mean a chance to shine in front of a national audience on what amounts to college basketball’s Christmas morning.

For others, there will be moments of frustration, sloppiness and anxiety.

Regardless of which players fall where on that spectrum, Self said it would be largely up to the players to find their way through it. And he’s looking forward to seeing how his guys react and handle it.

“Once we get into the game, if the atmosphere is affecting the players, I don't know if there's really much of coach can do (other than) call a timeout and say, ‘Calm down, take a deep breath.’”

KU junior Christian Braun said heeding those words of wisdom and locking in on every possession can be the difference between a good night and a bad one or a good stretch and a sloppy one.

Tonight’s tipoff is set for 6 p.m. central on ESPN.