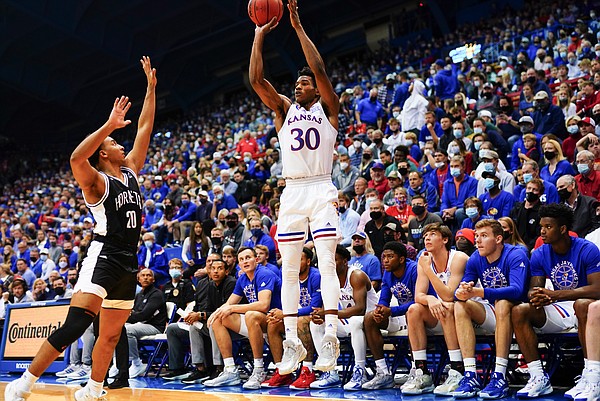 Kansas guard Ochai Agbaji (30) elevates for a shot over Emporia State guard PJ Johnson (20) during the second half on Wednesday, Nov. 3, 2021 at Allen Fieldhouse. by Nick Krug

When Kansas senior Ochai Agbaji steps onto the floor as a starter in Tuesday’s Champions Classic clash with Michigan State at Madison Square Garden, he’ll move into a tie for 11th place — with Greg Dreiling — on KU’s all-time consecutive starts list.

Dating back to a regular season game at Texas on Jan. 29, 2019, and carrying through into his senior campaign, Agbaji has started every game for the Jayhawks during the past two and a half seasons.

“I can remember that moment when I was getting introduced at Texas,” Agbaji said recently, when asked about the streak. “It was a big deal. And from then on it was just like, ‘All right, you’re expected to start.’”

After initially planning to redshirt, the 6-foot-5 guard from Kansas City, Mo., started the final 16 games of his freshman season in 2018-19. He followed that up by starting all 31 games during the 2019-20 season and all 30 a season ago.

“I’ve never really thought about that (but) 77 games is a lot of games, a lot of starts,” Agbaji said. “I’m just trying to continue that and stay healthy throughout the season.”

If things go well, Agbaji has a shot to finish the season in the top five on KU’s all-time list of consecutive starts. He needs 25 more to pass Wayne Selden Jr. for fifth place.

If things go really well, and the Jayhawks make the kind of run in the postseason that they’re both hoping and expecting to make, Agbaji could move into the top three. Thirty-four more in a row would move him past Frank Mason III and Aaron Miles, who currently sit tied for third on the list at 110 starts in a row.

The absolute highest Agbaji could climb this season would be into second place, one spot ahead of Raef LaFrentz, who started 116 consecutive games during his Kansas career from 1995-98.

Passing LaFrentz would require 40 starts this season and the Jayhawks would need to play three games at the Big 12 tournament and reach the national title game in the 2022 NCAA Tournament for Agbaji to make it happen.

Unless Agbaji elects to use his COVID year to stick around for the 2022-23 season, the idea of catching Danny Manning, with 141 consecutive starts from 1985-88, is likely a pipe dream for everyone.

Still, Agbaji said he was proud of his current streak and thankful that he has a chance to add to it. He views the role of being a starter at Kansas as an honor that should not be taken lightly.

“It does come with a lot of responsibility,” he said, noting that it’s important both on game night and in the big picture of representing the program and university. “Getting off to a good start (is key). That’s the vibe that coach puts out there for the whole entire game.”